Tom Pragliola
Tom and his son Evan have attended RRR each of the past four years.

A series of Music Masters Camps are offered each summer at Full Moon Resorts at Big Indian, NY. The camps are an intensive, week-long experience of interaction between professional musicians and attendees.

At Roots Rock Revival, different combinations of the ‘Artists In Residence’ play a set of music each night after dinner, and the first night features Oteil Burbridge, Luther Dickinson, Cody Dickinson and friends Craig Keil and Jackson Kincheloe.

After the show, the jamming begins. Attendees bring their guitars, sticks, and varying degrees of of musical experience to one of three different locations. The camp has attendees of all ages and musical levels and everyone participates. And it works.

The Roadhouse Jam is more formal, as James Biehn coordinates the musical combinations with a list of players scheduled to jam. It eventually evolves into a freeform jam with any musicians there.

There is also music happening at The Barn, with Berry Oakley, Jr. the facilitator, and at The Cafe, with Craig Keil the facilitator. These jams are a major part of the experience as all are eager to play and cut loose a bit. The music goes on until 2:00 or 3:00 a.m.

The week includes Master Classes, Workshops, discussions, demonstrations, etc. on all aspects of music - the communication and creation of music, performance, the business side, the lifestyle, and subjects such as jam etiquette. There are inevitably music group combinations and performances that are one-time only bits of magic.

Some of this years’ schedule included:

On Wednesday night, there was a Drum Circle Honoring Butch Trucks at the stream-side campfire.

The entire week is filled with great conversations, observations, and stories. Overhearing some of the casual side conversations can be enlightening and hilarious. The only disappointment for me personally was the absence of Master Keyboardist and Educator, Bruce Katz, who had been part of the faculty the last two years.

One of the extracurricular items of note were the acknowledgement of annual attendee Chris DiNardo, who started a “Let Oteil Sing” t-shirt campaign that has raised funds for  Gorilla Doctors [gorilladoctors.org], an organization involved with saving the gorillas in the wild.

Another was seeing the tremendous development of Brandon “Taz” Niederauer, who has attended every year, attending the inaugural camp at age 10.

Another was  journalist/author Alan Paul (“One Way Out” The Inside History of The Allman Brothers Band”) meeting Torsti Lakari, who had translated his book to Finnish.

And of special note, three of Butch Trucks’ children and all his grandchildren were there to share the experience.

Here are some comments from attendees:

Tammi - This is a transcendent experience for everyone who attends. My twin sons have participated for the past 2 years in Roots Rock Revival. They are thriving at camp and loving every minute of it. Their musicality grows by leaps and bounds during camp, but most importantly, they make excellent use of the practical knowledge they gain AFTER camp. We are so lucky to be a part of the Roots Rock family.

Tad Isch As a general comment , I feel it removes some of the age barriers and allows us older guys to communicate musically on an even level no matter what the age, not to mention I feel like a kid again while there!

Lara:  Sometimes in the midst of experiencing true blessings, you freeze. Your heart becomes so full of warmth that it seems to steal the heat from the rest of your body. Feeling as moved as you are, you’re somewhat cold and shaken. As you wonder how to process the experiences you’re having, you feel every nerve ending in you buzzing with electricity. You’re so incredibly happy, that you can barely see out of your eyes. It's those moments that drive your being.

Thank you Roots Rock Revival for bringing me to this place...for sending me into a state of purity and allowing transcendence to unfold. It was a genuine cleanse of pain and loss, and a revival of the soul. Five days of sporadic explosions of tears and endless music and expressions of love. I feel blessed and touched beyond belief. Thank you to everyone at camp...Thank you Butch. Forever grateful.

A MESSAGE FROM LUTHER:

Thank you all for a heart bursting camp. Everyone sounded so good, watching you guys cooperate and listen and help each other inspires me to no end. The camp has become a community where we all learn from each other, the lines between artist and participant are blurred. As I said, the passion and joy I soak in from you all during Roots Rock Revival fuels me throughout the year and I draw upon the RRR Fire most times I'm on the bandstand.

We have an idea and would like to encourage you all to write and record/film a song or riff or beat, or sing a song or write a poem, using your residual RRR energy. Let's post and share this energy and creativity. Part of the trick of songwriting is to harness improvised music and sculpt it into compositions to be played later.

For example, I wrote a guitar jam the Friday after camp entitled 'Esopos.' I also am working on sculpting a 'Smokestack Lightning' jam from the cafe that modulated and changed tempos for future use.

So what if every year we collectively collected new original music (or songs and poems and visual art) written at or inspired by camp? We could play this music in the years to come. We could eventually have our own RRR repertoire. RRR is so powerful this would be an easy afterthought, it only takes the organization to record and collect the ideas. 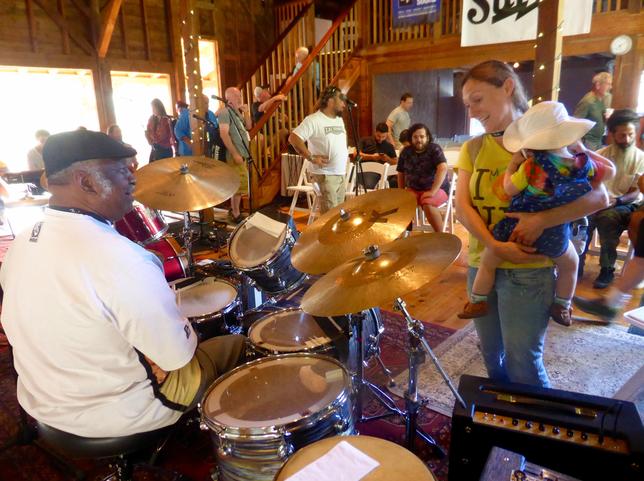