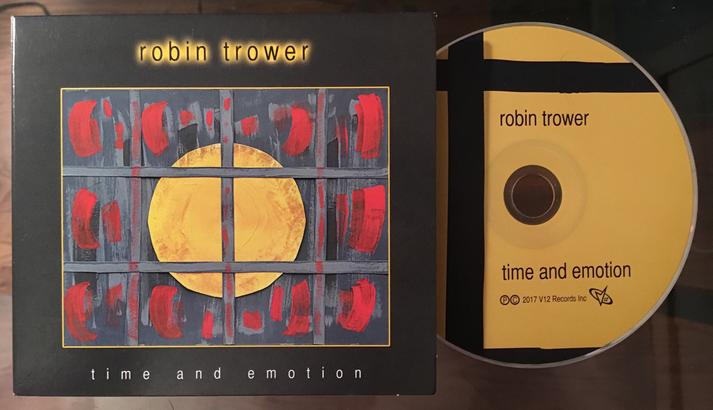 He did it. Again. After decades of making music, Robin Trower’s lastest Album, Time And Emotion, was released to the public today. Celebrate the blues! From the first strong notes of “The Land Of Plenty” to the final cut and the title track, “Time And Emotion”, this album is authentic Trower. His writing, singing, and playing abilities have been steadily growing and, even at 72 years old, are still maturing. Over the course of his last several albums, starting with Roots and Branches, released in 2013 and culminating with this latest release, Robin has become a truly stripped down musician, playing exactly what he is feeling. In a 2015 interview I did with Robin he told me:

“More than anything really, I think I determined that the music I’ve made over the last, sort-of, four or five years would be just to suit myself.  In other words, I was making tracks just to please myself and I wasn’t thinking about anyone else. It’s something I made a conscious decision to do.” “I just felt I was going to get it right by my own standards.”

He expresses this foremost with his powerful, soulful guitar playing. A sound that is uniquely his - honed over the 55 years – read that again – 55 years – since forming The Paramounts in 1962. And his vocals are a perfect fit with his music. The first time I really took note of his singing was on his 2014 release of Something’s About To Change. On this album he really pushed himself and his singing and it showed. Now I look forward to his vocals nearly as much as the music.

Robin Trower has roughly 50 albums to his credit, both studio recordings with and without Procol Harum, and live albums, not counting compilations or bootleg LPs. Since 1967, the year of his first album with Procol Harum, he has released new music, on average, about every 15 months.

Time and Emotion feels like the third or fourth album in a box set. During the 2015 interview he said to me, “After Roots and Branches I just felt I was moving into a new phase musically and as a player.”

Time And Emotion is another album where Robin sings every song, with a voice in total sync with the guitar. He also played the bass guitar on this album along with Livingstone Brown. His trio for this album is rounded out with Chris Taggart on Drums, a well-regarded studio musician having recorded on projects ranging from Saturday Night Fever and Jesus Christ Superstar to artists as varied as Maxi Priest and Sheila Ferguson.

There are twelve heavy-hitting blues tracks on the album: “The Land Of Plenty”, “What Was I Really Worth To You”, ‘I’m Gone”, “Bitten By The Snake”, “ Return In Kind”, ‘If You Believe In Me”, “You’re The One”, “Can’t Turn Back The Clock”, “Make Up Your Mind”, ”Try Love”, and “Time And Emotion”.  Some tunes, such as “The Land Of Plenty” lean more toward the rock side, though everything Robin plays has, somewhere in it, a straight ahead rock-and-roll feel. Then there are the blues-dripping tracks like “Returned In Kind” with the slow, ethereal sound he creates, first showcased in his classic Bridge Of Sighs album from 1974. Trower has a way of creating an atmosphere that transports you right to the edge – the edge of something intangible, something mesmerizing.  I’ve seen many shows where he has led the crowd through blistering solos only to end a tune in a slow, methodical, quieting way that leaves audiences silent and in awe.

From falling in love, to falling out of love, to questioning personal worth, Time And Emotion seems deeply personal, as if he really is baring part of his soul with each song. Robin Trower loves to play music. And his fans couldn’t be happier.  He is currently on tour and has a fiercely loyal fan base who have the utmost respect and admiration for the man and for his dedication to making soul grabbing music.

Hear the entire interview I did with Robin Trower at: http://www.rrb-live.com/04-24-15---robin-trower2.html

Time And Emotion can be purchased amazon.com or through itunes.