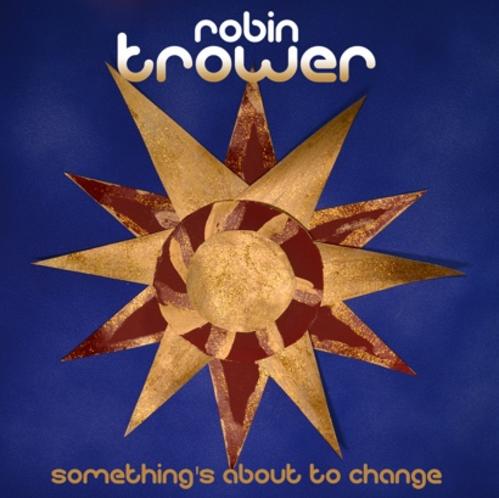 The very first notes of the title track from Robin Trower’s latest release, “Something’s About To Change” grab you and immediately you know, this is Trower playing his music. It has the feel of older Trower albums and there is an instant connection to his classic album, Bridge of Sighs. The slow pulse of his Stratocaster, the full, deep chords, and the impeccably placed notes, held exactly long enough in his classic, unmistakable style. Then, then you realize it’s Robin singing. Grab the CD – he sings every song on the album!  This is going to be a complete aural experience. And, oh yeah – he plays the bass on each song too!

Robin is not generally known for singing, spending years recording and playing with such vocalists as James Dewar, Jack Bruce, and Davey Pattison, all amazing vocalists in their own right. This is a very special treat since only Robin can channel the vocals and the guitar as one, as intended.  The clear message – Something is different and something is “about to change” is conveyed with a freshness to Robin’s playing that I don’t remember hearing in quite some time. Don’t confuse freshness with passion. Robin Trower has always been passionate about his music.

April 20, 2015 marked 41 years since the release of his classic signature album, Bridge of Sighs. Robin’s entire career spent testing, refining, trying new directions, all done with his brand of passion. It’s been 48 years now since beginning with Procol Harum, and amazingly, 48 years later, this new album is something very special. This album, as Robin told me, is “Just to suit myself.” This is clear after hearing it.

The second song, “Fallen”, moves soft and funky, with Robin’s vocals telling the story of a relationship taking a turn – towards honesty. Then “Riff no. 7 (still alive)” – upbeat with an impossibly catchy tempo perfectly married to the vocals. The back bone carried by Robin’s bass playing and the work of drummer Chris Taggert. Robin’s guitar talks at you – telling the story through his crisp leads. This song is great! Up and down each song on the album alternates - hard and heavy - to slow and sweet. On “Dreams That Shone Like Diamonds”, which “run though my hands like so much dust”, Robin digs deep into his personal blues. It is almost as if this song could have been written in the deep American south in the ‘20s. Classic Trower licks, finishing quickly, leaving you wanting more, but somehow just right. Followed by another classic, pure blues tune, “Good Morning Midnight”. It’s impossible to tell which conveys the actual story better, the vocals or the guitar. As Robin told me, his writing “...always starts with a strong guitar idea that I am responding to emotionally, then when I have that narrowed down, I work on what the vocal parts should be.”

“What You Never Want To Do” is a funky lyrical tune. An “I’m done with this” song. Robin’s playing is controlled and cuts directly to the point. “Strange Love” is a moody, penchant, sweet blues number about a love out of reach. “On Gold To Grey”, his signature quiet, screaming blues creates that trance-like atmosphere Trower fans have come to understand and love.

“The One Saving Grace” is a livelier rockin’ number. Again – vocals, guitar, bass – all perfectly in sync – because it’s exactly what Robin is thinking and feeling and you know it. “Snakes And Ladders” is another slow tune about “getting out of here”. A quick, right to the point, blues story.

“Up And Gone” has an almost 50’s feel to it. Big notes. Big playing. Familiar vocals – but with that typical Trower slant. A “traditional” blues tune (whatever that is) from a non-traditional player. “Till I Reach Home” is a lyrical homage to love.  Forgoing temptation to make it back to the one you love.Robin’s guitar truly speaking to you through this song’s journey.

This album is pure, solid, and feels as if it’s exactly what Robin wanted to say. When I asked who his influences were, he told me ”first and foremost Scotty Moore, guitar player with Elvis”…“and then the next really big influence I would have to say is BB King. Through BB King I started to change the way I played. Getting into a much more emotional human voice.”  Yet another tip of the hat to BB King in a week that has seen the Blues Boy join the other greats that have come before him.

I asked Robin why over the years he has seemed more relaxed and happier, even smiling throughout a good portion of his concerts now? Years ago he would stand a jam, rarely outwardly showing his enjoyment - he acknowledges this, telling me “That’s probably because I am enjoying it and feeling pretty comfortable with what I’m doing.” Now that he is playing just for his own enjoyment and to please only himself, it has become more fun.I, for one, am very glad that the process of creating music and playing live is becoming even more enjoyable for Robin Trower and that he continues the search making fine music along the way.

"Something's About To Change"