Give The Drummer Some: The Adventures of Butch Trucks
Tom Pragliola

On Tuesday, March 11, 2014, drummer Butch Tucks missed his first show in the 45 year history of The Allman Brothers Band. He made it back the next night to play on half the songs, still not at full strength. On Friday, March 14, he was scheduled for a midnight “aftershow”, as well as a “Hittin’ The Note” party at 2:00pm on Saturday the 15th. What originally seemed like maybe a bit of an overly ambitious schedule now seemed very questionable. But Butch played the entire show on Friday at The Beacon and was amazingly at Lucille’s in BB Kings at midnight for “Butch Trucks and Friends”.  The band, consisting of Butch with Oteil
Burbridge on bass, Marc Quinones on percussion, Tom Guarna on guitar, Bill Evans on sax, and Craig Keil on keyboards, opened up with ABB mainstay “Dreams”.  Experiencing these guys in a dimly-lit small club setting seemed like a guilty pleasure, as in, “Whoa, I’m feeling like one lucky so and so to be here for this!”

The next number was a funky version of “The Weight”, after which, Butch, acknowledging he was a little tired, brought out nephew Duane Trucks to play drums in his stead. His introduction included,  …. “He’s gonna hate this, Derek’s little brother – Duane Trucks”.  A lot of folks were there to see Butch in an intimate after-hours setting, while probably some were there on the hope that Derek or Warren might turn up. Butch brings a style, sound, and energy, and I was there to experience his drumming in this setting, but it was hard to fault him. He was giving whatever he had.

Butch and Friends were promoting the 2nd Annual “Roots Rock Revival” scheduled for August 18 – 22, 2014. This is a Music Masters Camp at Full Moon Resort in the Catskill Mountain region in upstate New York, billed as Two Generations of Rock n’ Roll Masters, with Butch, Oteil Burbridge, Luther and Cody Dickinson, Bill Evans, and Craig Keil.  Butch gave an overview of the music camp which will include master classes, jam sessions, Q&A sessions, and open rehearsals. This is an awesome opportunity to get immersed in the music with these incredible musicians. For more information go to: http://www.rootsrockrevival.com.

At the Hittin’ The Note party in the main club at BB Kings the next afternoon, a similar scenario played out with Duane playing a good part of the set. This time Junior Mack was on guitar and vocals, Bill Evans’ sax was missing, and there was a different percussionist.  They managed an energetic set.

The next part of the proceedings – Galadrielle Allman, the daughter of Duane Allman, doing a book reading and signing of her book “Please Be With Me: A Song For My Father”,  a story of her very personal journey learning about the man her father was and the impact he had on so many. As he gave the introduction, Butch related the following: “I’m feeling a little tired, but let me tell you a story. Every night I drag my aching and tired bones over to The Beacon, and when it’s time to play I look at those three steps to get up to the drum set, and I feel like it’s gonna be tough to get up those three steps. Then, about halfway through the first song, it’s like I’m 17 years old, AND I FEEL LIKE SUPERMAN!” 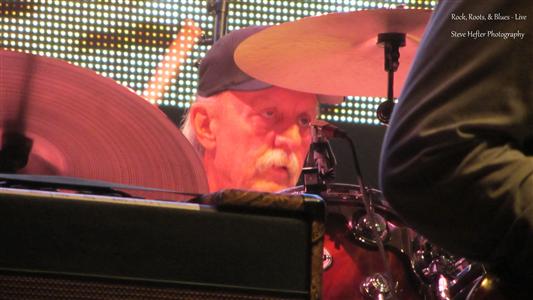