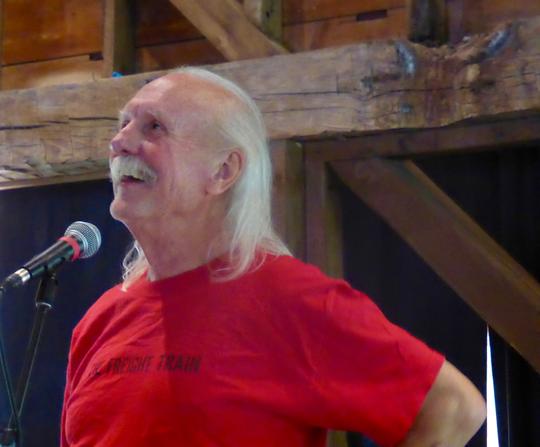 Carrying On at Roots Rock Revivial - 2017

Tom Pragliola
Tom and his son Evan have attended RRR each of the past four years.

Roots Rock Revival is a Music Masters Camp conceived by Butch Trucks and Michael Price in collaboration with Henry Stout at Full Moon Resorts. It began in 2013 with ‘Artists In Residence’ Butch Trucks and Oteil Burbridge (of The Allman Brothers Band), and Luther and Cody Dickinson (North Mississippi Allstars). Occurring every August, it has expanded every succeeding year in both Artists and attendees.

This year marked the 5 year anniversary, and the first without Butch, who died in January, 2017.

As it convened on August 14, 2017, a great many of the 100 + attendees were people who had attended previous camps. A core of 30 or 40 have been there every year. Butch Trucks had been the heart and soul of the camp as the main spokesperson. He regaled everyone with his enthusiasm and stories, including some very hep jive and some of “The World According To Butch Trucks”.  Everyone gathered in the barn that first afternoon to discuss the future of the camp, and how it would carry on without Butch.

Oteil Burbridge, Luther Dickinson, Michael Price, Vaylor Trucks, Brandon Niederauer, and Bert Holman all spoke about “the family” of The Allman Brothers Band, and how music is a realm to communicate with the spirits. All felt compelled to continue, and share and communicate in a gathering that you “can’t get anywhere else”. It was Butch’s favorite week of the year, and each year he would say how much he hated to leave.

Bert Holman, the Allman Brothers Band manager, talked about how badly we all miss Butch. Bert: “Butch was so passionate and loved to be with people who were also so passionate. There is a lot to learn from his playing and his boundless energy and his complete joy with music. If you knew Butch you were blessed. And the camp maintains the spirit to go forever.”