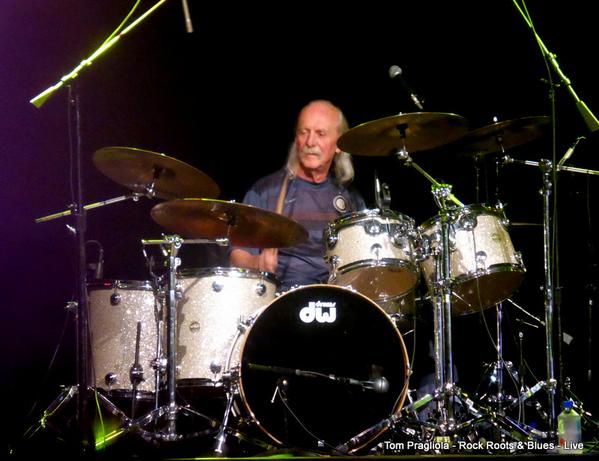 Since the final performance of The Allman Brothers Band in October 2014, the exceptional music that band was known for lives on thru the pursuits of its’ former members. There is no stopping these guys.

Butch and friends returned at the Peach Festival in August, this time with  Jack Pearson and Pat Burgeson on guitar, and Bill Evans on sax, and the band was referred to as “Les Brers”.

August 21, 2015, marked the debut of Butch Trucks and the Freight Train Band.

For forty-five years, Butch “Freight Train” Trucks was the power engine driving ABB, aided and abetted by brother Jaimoe in the best-known double-drummer combination ever.

Joining the band at the August 21 show at The Paramount, in Huntington, NY, was Butch’s son, Vaylor Trucks, on guitar. I think the question in the minds of most in attendance was “Where the hell has this guy been?” Playing in his own angular jazz-influenced style (think John McLaughlin/Frank Zappa) Vaylor added a unique fresh take on blues standards, and ABB classics.

Completing the quartet was veteran keyboardist Bruce Katz (Ronnie Earl, Delbert McClinton, Gregg Allman Band). Bruce is a monster on both piano and B-3.

The band hit the stage with a powerful, smokin’ version of “Hot ‘Lanta” that pulled everyone in and blew them away.  Berry Oakley, Jr. handled the vocals on the blues songs, and the soul-jazz classic “Compared To What”. An extremely talented musician, Berry is a natural fit in the band, and the sight of him performing with Butch is a “round-trip” for those who had the good fortune to see the original ABB perform.

And Butch had a couple of surprises up his sleeve.

First he brought out Heather Gillis, a discovery from the Florida music scene, performing the Bill Withers classic “Ain’t No Sunshine”, displaying her vocal prowess and steady guitar chops.

Then Butch brought out 17 year old Lara Cwass from Queens, NY. The young guitarist featured a mature tone and feel beyond her years on the ABB classic “In Memory of Elizabeth Reed”. A very auspicious start to what should be a great career. We will surely be hearing more from her in the future.

Bruce Katz, immediately after the show: “Just a spectacular night playing with Butch Trucks and the Freight Train Band”

The Freight Train Band will next appear for two shows in Florida.