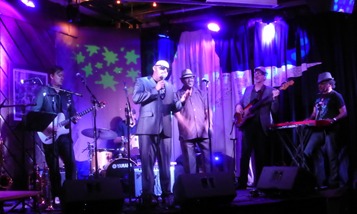 John Nemeth to the venue, along with the band The Bo-Keys. Nemeth

teamed with The Bo-Keys in 2013 to record “Memphis Grease”. The

Bo-Keys is a group of veteran Memphis performers, carrying on the

tradition of Memphis soul bands like Booker T. and The MG’s and The

music club, and the stage, sound, and lighting and the gritty music made

for an authentic roadhouse experience. Nemeth and the band, “a deeply-forged amalgamation of scorching harmonica driven blues and sweet blue-eyed soul” (1), tore through the thirteen songs from the CD, opening with “Three Times A Fool”, the Otis Rush classic, one of only 3 non-originals on the CD. At mid-set, NYC guitar virtuoso, Scott Sharrard (Gregg Allman Band), sat in on “Bad Luck Is My Name” and “Keep The Love A Comin’”. Scott’s scorching solos brought the songs into a different stratosphere. What an added treat! The introduction by Nemeth for “Elbows On The Wheel” went something like this: “being a musician working at night, my girlfriend was jealous that I had my days free, and demanded I get a job to help pay the bills, so I got a job driving a truck, and this song’s about driving the truck and playing my harmonica while driving” ...

“Elbows on the wheel, Harp in my hand, I’m playing Junior’s ‘Hoodoo Man”. What was apparent from the get-go, John Nemeth and The Bo-Keys are one of those perfect pairings that doesn’t happen that often and should be on your bucket-list to be seen and appreciated. A classic merger of soul and blues. Low-down and sophisticated at the same time. Nominated for five Blues Music Awards in 2013, John Nemeth was the 2014 Blues Music Award winner for Soul-Blues Male Artist of the year.

I captured some great video of the show, and click here to see photos of the show. Enjoy!

Well, three nights after seeing Memphis soul in downtown Brooklyn, I discovered the BBQ joint Beast of Bourbon on the outskirts of my Ft.Greene/Clinton Hill neighborhood in Bed-Sty, where Hasidic Jews mingle with Mexicans and hipsters. Their slogan: BEER BBQ and ROCK, but guess what. The night I went it was some real BLUES. A spacious, relaxed room with the smell of BBQ, brews on tap, and Ethan Eubanks and The Blues Bangers - drummer Ethan Eubanks, vocalist and guitarist Bill Sims, Jr, and bassist Andy Hess. NYC blues master Bill Sims, Jr. led the trio with his interpretations of blues standards including I’ll Play The Blues For You, and also included a tribute to recently deceased jazzman, Horace Silver, performing the classic “Song For My Father”. Bringing it home. Close to home!

Singer and songwriter Marc Broussard and band performed at Brooklyn

Bowl to a packed and eager audience. Opening with “Eye On The Prize”,

the crowd of hard-core, enthusiastic fans was immediately singing along.

Marc plays a mix of soul, pop, and rock with a bit of funky Louisiana

sauce thrown in. Much of his music is grounded in the soul music of the

Marvin Gaye and Stevie Wonder. It seemed that everyone knew all the

words to every song, and sang along, but oddly enough - maybe because

everyone did know all the words, AND the phrasing, they never

overwhelmed the sound coming off the stage. It looked like they were just

hear them, in time, in tune, respectful of the lead singer on the stage. I’m not big on sing-alongs, but that was awesome. Songs from Marc’s debut CD from 2004 were some of the most popular - Rocksteady ... Save Me ... Come Around ... Lonely Night In Georgia,... Home.

The show included a segue from “Save Me” into “Hey Joe”, Marc’s “Try Me” morphing into Al Green’s “Love and Happiness”, and a cover of Blood, Sweat, and Tears’ “I Love You More Than You’ll Ever Know”. There were hints of The Rolling Stones (think Beast of Burden) in his “Weight of The World”, and of Bruce Springsteen in his new song – “Hurricane Heart”. The encore included Led Zeppelin’s “Good Times Bad Times”. It seems a lot of bands are playing a cover of Led Zeppelin these days, a good-sounding LZ cover is not so easy to do, but the bands I’ve heard doing this have been doing justice to the songs, a surprising and welcome development. Marc Broussard and band pretty much nailed it, with kudos to the drummer, playing the John Bonham syncopated bass drum pattern. 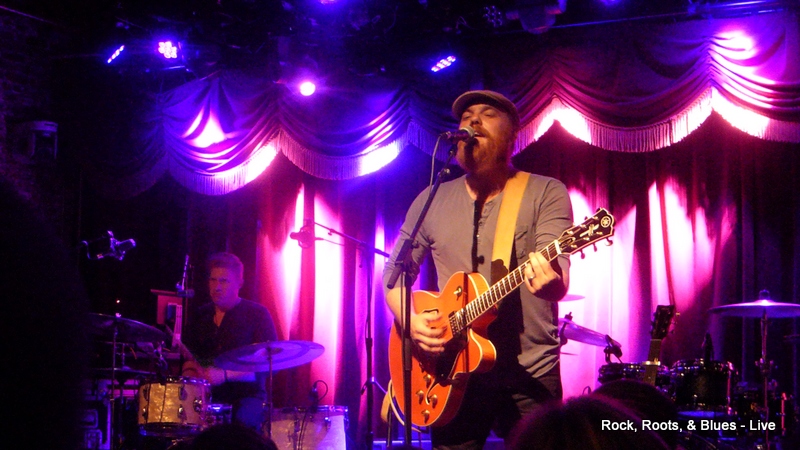