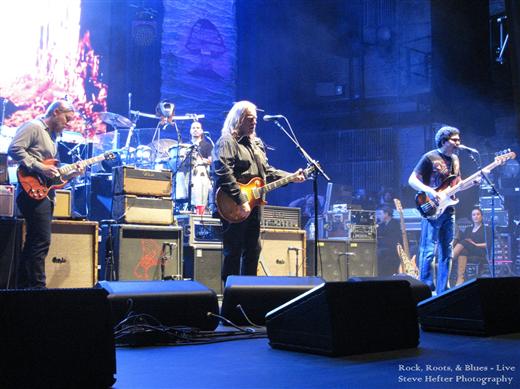 The Allman Brothers Band’s Last Stand at The Beacon: To Be Continued

The title of this article could have been “And still, the best of them all”. Capping a remarkable 45 year career, the band held court one last time, the final run of a 25 year March residency at The Beacon in NYC. The Beacon runs have coincided with the almost unimaginable reinvention of the band beginning with Warren Haynes, along with Allen Woody, (and briefly, Johnny Neel) joining original members Gregg Allman, Dickey Betts, Butch Trucks, and Jaimoe, for a “20th anniversary tour” in 1989. With Marc Quinones soon joining them on percussion, and in 1997, Oteil Burbridge replacing  Allen Woody, and Derek Trucks  coming on board in 1999, and Warren back replacing Dickey Betts in 2000, the final amalgam of ABB burned like a comet thru 2014. The last 25 years matched the original 1969-1971 years - with founder/leader/guitarist extraordinaire Duane Allman and bassist Berry Oakley - with passion, energy, and musicianship, playing a unique mix of blues, rock, and jazz tinged jamming.

During the first 4 shows it seemed that the band was determined to play every song ever associated with them, with each night seeing an almost completely different set list, repeating only a couple of songs twice. There was no doubt ABB was at the top of their game and were going out in a blaze of glory.

I attended the 3rd show of the run on Tuesday, March 11, and an unexpected and unprecedented thing happened. Drummer Butch Trucks missed his first ABB show ever, due to being “under the weather”. While very disappointing,  Warren Haynes announced from the stage that “ the band will carry on”, and indeed they did, playing 2 strong sets with the aid of Duane Trucks on drums (Derek’s brother and Butch’s nephew) and latin percussionist Bobby Allende. One of the many things that makes ABB a great band is the chemistry and interplay of all 7 members. Playing without Butch, the driving force in the drums/ percussion section, did change the dynamic, but all the bandmembers are so powerful and flexible that  they played without ‘missing a beat’, though without the “edge” that Butch provides. Butch’s absence provided another dynamic, however, which was percussionist Marc Quinones taking over the main drum chair on half the songs. Marc has played drumset occassionaly on a song or two in shows over the years, (mostly along with Butch), but this night there was a lot more responsibility and he added a slightly different edge with his aggressive style. I was impressed with his sound and feel, particularly on the blues and funk sections. Marc, you kicked ass!

The show opened with Don’t Want You No More/It’s Not My Cross To Bear followed by a strong version of Done Somebody Wrong. Next was End of The Line and Who’s Been Talking, followed by a fan favorite, True Gravity, and Every Hungry Woman. The Juke Horns came on to join the band for the last 3 songs of the first set – Please Call Home, Stand Back, and The Same Thing.

The 2nd set opened with an inspired version of No One To Run With which included an amazing video tribute to Duane Allman, Berry Oakley, and Allen Woody. At times the real time Derek Trucks and Warren Haynes were superimposed on the screen with Duane, Berry and Allen, appearing to all be playing together. The spirits and the spirit live on.

The rest of set 2 seemed a bit random, the band performing Good Morning Little School Girl, Come On In My kitchen, That’s What Love Will Make You Do and The Weight with The Juke Horns, and Les Brers In A Minor.  The encore: One Way Out.

I came away feeling that it was an unusual Allmans show for sure.

I was back on Friday, Mar.14 for the 5th show of the run, and it was a tour de force! James van der Bogert sat in for Jaimoe on Blue Sky, and Duane Trucks filled in for Butch on the encore. Otherwise, it was a Friday night show with no guests. Seemed like they were digging in with a little extra gusto, but I do believe they do that every night. The 1st set included the first time we heard Gamblers Roll this year, and True Gravity, at that point the most often repeated song of the run.

Here’s the 1st set: Done Somebody Wrong, Come and Go Blues, Wasted Words, Dusk Til Dawn, Gilded Splinters, Gamblers Roll,  True Gravity, Hoochie Coochie Man, Ain’t Wasting Time No More. Come and Go Blues and Gamblers Roll were a joyous reminder of how strong Gregg’s vocals have been this year. He was sounding as bluesy and soulful as ever.

It was just Gregg (on guitar), Warren, Oteil, and Butch to start the second set with Melissa. The set included Warren singing Blue Sky and Oteil up front on Seven Turns. I had no choice – I was overtaken by the power and magic of the music – like a  living, breathing, organism had possessed my mind and body. Does that sound to much like new-age gobbleygook? Ok, how’s this: The band was fuking great!

2nd set: Melissa, Blue Sky,  Black Hearted Woman,  Seven Turns,  Rockin Horse, Get On With Your Life, In Memory of Elizabeth Reed. Encore: One Way Out.

On the night of the 9th show, Friday, March 21st, it was announced that Gregg Allman would not be able to perform due to a bad case of bronchitis. Once again the band adjusted and played 2 strong sets. Gregg was also out for the Sat., March 22nd show, but the band carried on with 2 killer sets.

As great as the band performed, there was no doubt that an Allman Brothers show without Gregg seemed incomplete. Two days later came the announcement that the final 4 shows were cancelled due to Gregg’s illness. A huge disappointment to all fans. The shows will be rescheduled.

Tough to end this report on such a down note. The shows this year have been as good as anyone could expect and I’m sure every person attending had a twinge of sadness that this incredible music experience would be no more after 2014.

The good news – it’s not over yet! In addition to some festival dates and as yet to be announced shows, The Allman Brothers Band will be back for a final 4 nights at The Beacon! …. maybe more?

We can all hope.