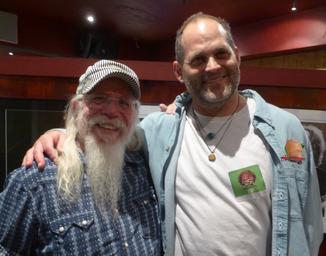 “An era comes to an end, I guess it has no impact for people who don’t care about the band, but I know,  speaking to people who go regularly to the Beacon,it’s a weird thing to think about,  for a lot of us …there’s the actual experience you have at the shows at The Beacon, which for a lot of us have been, oftentimes, quite profound,  but there’s also just the rhythm, you know there’s certain things you do every year,  like in September kids go back to school, it’s the Jewish holiday, if you’re of the faith,   Christmas time you have this break whether you’re Christian or not, you have the break of New Year’s, and then in March you have the Allmans at the Beacon and then it’s spring, it’s really just part of the rhythm of the year it’s a strange thing to look out and think it not being there.

I’m going to read a little bit, but I basically just want to talk, you can read for yourself, I know some of you have already read the book, and Kirk (West) and I will talk a little bit.

I think most of you tonite, or other nights, have had a chance to look around at the photos. I think it’s fantastic, and there’s about 75 or 80 of Kirk’s photos in the book, and Kirk was also the photo editor of the book, so aside from the photos that are his, he played a big role in what’s there,  and just to speak a

little bit, off the topic, about that, my relationship with Kirk is very central to my

involvement with The Allman Brothers Band, and as I’ve done a lot of radio

interviews for the book, one guy I talked to said, well you’re like an embedded

journalist, you’re embedded with The Allman Brothers, how’d you do that?

It’s a bit of an exaggeration, but it’s close enough to the truth, and really the

way I did it was essentially due in large part to my relationship with Kirk. And

he and I met just because I was a journalist, writing about the band, with an

interest in them. He was tour magician, I think when I met him he was the tour

mystic, then he became the tour magician. Nobody ever could really explain

what Kirk did, he just sort of did everything. Everything and nothing. Everybody

The Allman Brothers Band. He was the guy that would really get it done. And he also has this extensive archive of photos, which again, came in really handy putting together this book.

So, I’m going to read just a little bit from the Author’s notes, which is basically the introduction, and give you a feel for it, and then, we’ll talk a little and take some questions. “One Way Out” is the culmination of 30 years trying to untangle the myths and legends surrounding The Allman Brothers band. I’d interviewed the members hundreds of times, shared meals,  ridden buses, quietly watched rehearsals, and been to countless shows. Through it all I never lost sight of why the story matters - the music. Any access I‘ve gained has been in service of trying  to understand how this exotic brew came to be. I viewed everything with the eyes and ears of a journalist but the heart and soul of a fan. The Allman Brothers Band, I believe, has no equal.

Actually, I’d like to stop there and talk a little bit about that sentence, “I viewed everything with the eyes of a journalist, but the heart and soul of a fan”. I was asked that by a very astute interviewer yesterday, how I managed that division.

How would I know when I was working as a journalist, or operating as a fan or friend of the band or the person I was

interviewing, and the reason I wanted to stop and talk about that,  I do think it’s a really interesting topic, and it can be a perilous situation because ultimately I do feel, as a journalist, that I’m there to serve my reader. If I’m interviewing Warren, and he feels comfortable to invite me to his apartment to do the interview, which has happened, I’m not just there to hang out with Warren, I’m there to do an interview.

And there was a point, I would say, I had a couple of interviews, where, especially with Warren, I felt afterwards that I hadn’t adequately prepared, because I had got so used to talking to him, it was so not a big deal for me to talk to him, and in transcribing the interview and preparing the story, I kinda realized that, that I had fallen down on the job, basically it’s a form of getting lazy, or too comfortable, and I was upset with myself. I sort of rededicated to not doing that.
In terms of when I was being a fan or a friend, or when I was a journalist,...because I spent so much time talking to the guys, especially  Derek and Warren,...and Woody,...when he was still with us, I did have to set some guidelines. I’d basically tell those guys….when we’re talking we’re talking, when we’re interviewing we’re interviewing. So I would never use something someone told me when we were just talking and it wasn’t a formal interview. If they said something that I thought was really interesting, that I wanted to use, I would ask them,…or stop….or next time we were doing an interview, I’d say, “when we were talking you said the following, is that ok to use”.

It can be a fine line, and occasionally you note things that you just can’t use. But because this is a long-term project, a thirty year thing,...there’s plenty of things in here that I couldn’t use at the time I first knew about them, that eventually I could. Again, I would double back and check with people  and not try to trap anyone.

And so it’s a situation that where, sometimes you have to give up something that you’d really like to run with, to use, for the longer term gain,...maintain the long term relationship, and the fact is so much of the access I’d get is because people trusted me,  so if you violate the trust that goes away, so it is an interesting fine line, subject to change and it was interesting,  even with Kirk,  we spoke so often over the years and even in the writing of this book, you know I’d call him all the time and say ... so and so says this, and so and so says that....what do you think….we would try to recreate timelines, and just try to be as careful as possible. It comes down to certain things you just can’t tell exactly what happened, and that’s why in some places I put multiple versions and put them side by side which I thought was an interesting way to do it.

So, now I call Kirk and say - now it comes time to doing an interview, now were gonna actually talk and record it …this is actually for the book, so anything you say now  I consider for publication.  Of course you can always stop and say, “don’t quote that”. He didn’t do that, and most people didn’t, even though there were a few things where I promised people I’d get back to them and make sure it’s ok,  there was very very little that people didn’t want included. And I think, probably 10 years ago, I really wanted to write a book about the Allman Brothers,  and then I didn’t do it, and then I veered in a different direction, I moved to China for four years, and I kinda thought that stage of my life was more or less over. While I was there “Skydog” came out, the Duane Allman book, I think it’s a pretty good book, and I was upset when it came out, I was excited and I was upset,...I thought my moment had passed. Obviously that didn’t happen, and what I realized eventually, in retrospect, is that this was the right time, to do it, for me personally, but also because there’s a lot of things that if I had tried to write the book five or ten years ago, people wouldn’t have talked about or wanted on the record. And now, as guys get close to looking at a point close to the end, I really don’t know. certainly they’re looking at that as a real possibility. People are more ready to be more real, and have an interest in what they consider the real story on record. And that’s a change that I couldn’t have realized five or ten years ago. That that would’ve been the case, but I realize that it is.”

See Alan's website to purchase the book or right to Amazon.

Also, Kirk West recently opened a photo gallery - “Gallery West” - in Macon, Georgia, and will soon be publishing a book of photos - “Les Brers:Kirk West’s Photographic Journey With The Brothers”

Check Kirk out at his website to purchase prints or just see some great photos!

"One Way Out: The Inside History Of