Experience has taught me that if Tab is playing at either Rams Head or The Birchmere, there is a high likelihood that he will be playing both clubs within a few days of each of other. And that's just what happened - Tab announced his shows at Rams Head On Stage first, he played a 3:30 and a 6:30 show on November 15 - and shortly after announced he'd be playing The Birchmere a few days later. So, I was able to see Tab twice within a few days!  Rams Head has just begun to put on live shows again since shutting down in March.  They are accomplishing this by removing about a third of the tables, requiring that you buy all the seats for an entire table, and the strangest safety measure of all- they set up an eight foot high plexiglass wall that completely surrounded the stage. That meant we got to see Tab play in what looked like a giant fish tank. Surprisingly though, the sound was great. It did make taking photos a challenge (that's an under statement), but in true Tab fashion this didn't slow him down at all. In fact - he alluded to it when thanking the club, and said, "whatever it takes for us to play live, in front of people, again.". After sharing some of his philosophy about live streaming, drive-in shows, other Covid related music topics, he, Corey, and Terence went to work and cranked out one hell of a great show!

If playing in a box was bothering Tab, you couldn't tell.   He seemed extra "on" this night and the smaller than usual crowd loved every minute!  Below are two videos I took, Night train and Medicine, two crowd favorites, and two of my personal favorites, and they both kicked ass! One thing about Tab Benoit - he is dedicated to his craft. He tkes every gig seriously and was truly grateful to be able to play for people.  He mentioned hat he and the guys ust jumped in the bus for a quick three week tour, and that he was likely the only band actually on tour. Not so sure that last statement was true at the time, but, at the vey least, he is certainly in a very small circle of musicians.​ 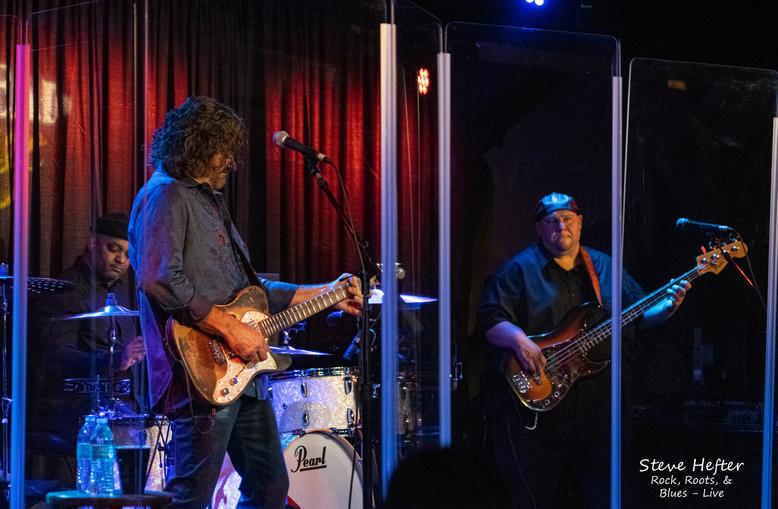