We are very lucky, and for some reason, Tab Benoit plays in the DC/VA/MD area often. On , August 20, 2019 Tab made Rams Head On Stage home for the evening. It's been a while now, but Tab is branching out. After producing music for Anders Osborne and others, Tab has started his own label - Whiskey Bayou Records. Seems like a natural extension for someone as talented and experienced as Tab. One of the artists on his label, Eric Johanson, has been tourng with Tab. Eric opens the shows with Corey Duplechin (Tab's bass player) and the man himself on drums. For those who may not know, Tab started out as a drummer and as a kid, seemed destined to be behind a kit. We know how that turned out - Tab has become one of those guitar players that true guitar junkies go to see. His style is straight ahead - take no prisoners - hell, take nobody - but just crank out his unique brand of Louisiana swamp rock/blues. Eric Johanson played a great opening set of his own music, drawing heavily from his 2017 release (on Whiskey Bayou), Burn It Down. Eric has his own unique style - and with the band he had behind him, he sounded great. It's fun to watch Tab play the drums, he is very into it, and from talking to him about it, he really loves when he can do that.

Tab's set started out blazing and rarely slowed down. His sound is driven by his pure talent combined with his love of his thin-line Telecasters plugged directly into his Cat 5 amps. No toys. No effects. No illusions. What you see and hear from Tab is what you get, and personally, I really dig that sound. Note that several guitar players play by plugging directly in. Springing to mind is Derek Trucks. There's just something about this set-up produces an unadulterated sound that just grabs the listener. Whether wanting to or not, it didn't take long for Tab to begin fielding requests. If you ask him to play something, do yourself a favor and have the song title right and male sure that Tab actually wrote or recorded it. With his usual knack for knowing when to bring things down and play one of his slower songs or a straight up ballad, Tab puts on a complete show. Even without his usually hilarious stand-up comedy bits, Tab's shows are an experience. The comedy only adds yet another layer to an already smoking show.​​ 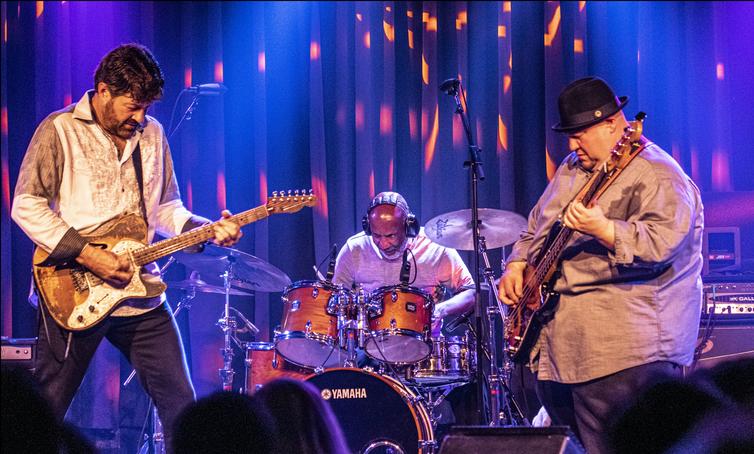