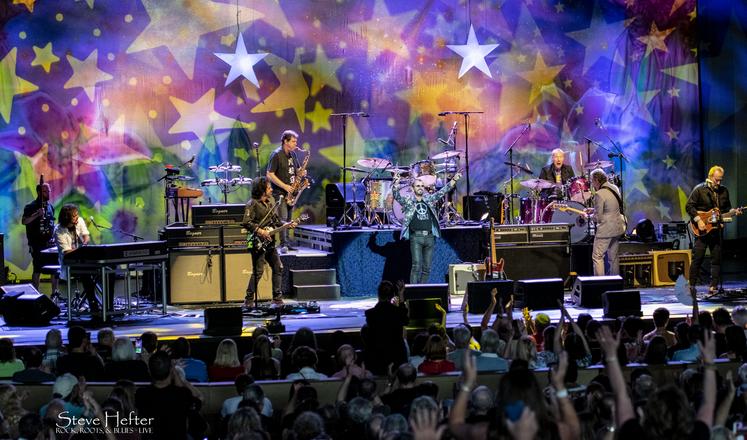 ​August 10: Ringo Starr & His All Starr Band.  A Beatle came to Wolf Trap!  That's funny, but in 2019, it's also great to be able to say. And not only did Ringo Starr come - he played.  And he played great!  Ringo Starr, iconic, legendary, historic drummer for The Beatles, brought an amazingly talented group of musicians with him to the Wolf Trap stage. Gregg Rolie on keyboard and vocals. You've probably caught a few shots of Gregg from Woodstock singing with Santana. An integral part of the early Santana sound, providing vocals on Black Magic Woman and many other classic Santana tunes. Gregg also cultivated and prospered in another band you may have heard of, Journey. On guitar with the All Starrs - Steve Luthaker, front man and guitarist for Toto among his other accomplishments. On guitar and vocals, Colin Hay, best known for his work in Men At Work. Gregg Bissonette on the drums. Greg made a name for himself primarily working with Van Halen singer David Lee Roth, as well as studio recrding with some of the big names in rock. Warren Ham, who has played with the likes of Kansas, Cher and Olivia Newton John, and Hamish Stuart who played for years with the Average White Band and also Chaka Khan. He played in Paul McCartney's band as well as wrote for many of the big names in music. This band played all the hits led by the natural showman Ringo!  The audience was treated to music from each member of the band. Of note was Black Magic Woman, Land Down Under, and the many hits from Ringo. In addition was a great crowd sing-along to Yellow Submarine! Wow - 2019 - singing Yellow Submarine with Ringo, live. This was a great show full of nostalgia as well as overal good vibes. My guess is Ringo's goal is to get the happy and smiling, to share a couple of hours of true "leave it all behind" and enjoy the moment.​

Ringo Starr & his All starr Band