​July 31: Steve Miller Band with Marty Stuart & The Fabulous Superlatives and Matt Anderson.  Stevie "guitar" Miller is not only still at it, he is rocking the audiences smart enough to go catch the Steve Miller Band live. Like Bruce Hornsby, My teenage years were filled with the FM sounds of Steve Miler as well as his shows, since he seemed to pass through and play once a year for a long time. Steve's guitar playing and especialy his voice, sound fantastic.  That unique tone to his voice still ever-present and right on. On tour with him Gordy Knudtson, Kenny Lee Lewis, Jacob Peterson, and Joseph Wooten provided the perfect backing band as well as the perfect, "let's push the boss a bit" band.  They were great. At one point all but the drummer were at the front of the stage dancin' and jammin'!  This was an excellent show and one I had a lot of fun being in the audience for.

Opening the show to a sparsely filled amphitheater at 7:00 pm - with people milling about, finding their seats, eating, hitting the bathroom, or walking around the beautiful grounds, strolled out a man with an acoustic guitar. His name - Matt Anderson - and forging through what must have been a tad of a nerve-wracking situation, proceeded to put on a passionate, heart-felt set of blues. Quite an accomplished guitar player, it was Matt's booming, attention-grabbing voice that made an impression on me. Having just released his latest album, Halfway Home By Morning, in April, Matt showed no signs of stress walking out on that huge stage with only his voice and an acoustic guitar and proceeded to throw down a scorching set of music. His voice filed that amphitheater and for those luck enough to have been in their seats were treated to a fantastic opening set. Matt's voice has a wide range, from quiet and tender to rocking and forceful.  I was glad i didn't mis him as I became a fan before he was done with his set. I hope to catch Matt again soon. In between Steve Miller and Matt Anderson was legendary folk/bluegrass/country legend Marty Stuart. It seemed odd to me that the band on right before Steve Miller was so vastly  different, and so incredibly talented.  Marty worked with Johnny Cash and Carl Perkins very early in his career and eventually found the formula to make it as the leader of his own band. He and his band put on a great set of down-home rockabilly mixed with bluegrass and several other genres. I didn't know what to expect, but Marty was very good.  Putting on a truly professional show with "get-up-and-dance" music, it was a fun set of great music. 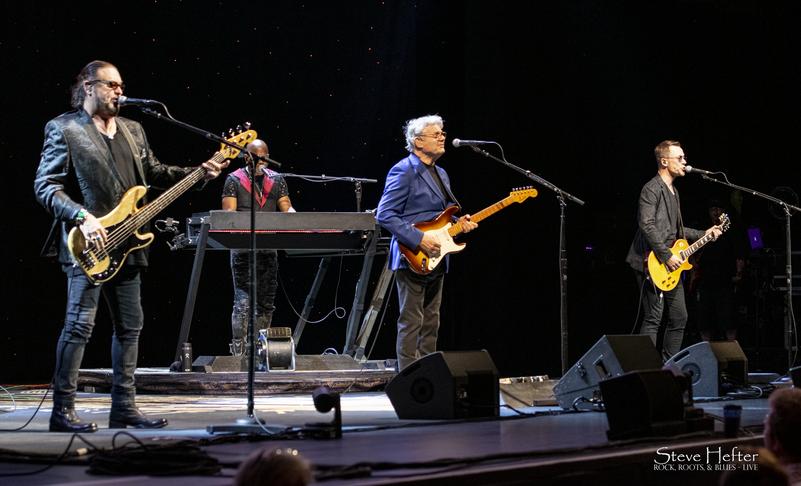