​Ten cities. Roger Daltrey chose ten cities in which to perform The Who’s classic rock opera “Tommy” and on June 10 & 12, 2018, it was Vienna, VA and the world-class venue, Wolf Trap. Wolf Trap has a very interesting history and agreement with the U.S. Park Service. It's a wonderful example of what can be accomplished when the best collaborate on a plain good idea. In each city on the tour, Daltrey is backed by a local orchestra and his touring band, The Who Band. The band members are Simon Townsend (Guitar, vocals), Frank Simes (Guitar, vocals), Scott Devours (Drums), Jon Buttons (Bass, vocals), and Loren Gold (Keyboards). Simon is Pete’s baby brother, which would be apparent even without the same last name. He sounds remarkably similar to his brother, but he has a clear and unique talent. The orchestral arrangement was done by David Campbell. “Tommy” was first performed live by The Who on April 22, 1969 (that's 49 years ago!). It’s a remarkable thing to watch a man who has been at the forefront of music for over five decades walk out, stand in front of that sold-out audience at Wolf Trap, and perform at his level.

In addition to nailing every song in the vocally challenging and sometimes complicated “Tommy”, he gave the audience a taste of other Who music playing, "Who Are You" and "Baba O'Reily" as well as "Always Headed Home", the final cut from his just released album, "As Long As I Have You" out for all of 12 days when we saw him. With his signature microphone whips using the cord like a lariat, Roger Daltrey put on quite a performance. His vocals leading the way for all that sound coming from the stage made for a great show. The Wolf Trap Orchestra was superb and I could only guess, there was an extra level of excitement for the members.

The Who band are talented in their own right. I enjoyed their energy and freshness, Frank Simes can play some serious lead guitar and Simon is charged and fun – comfortable jamming and singing.

A little over a week after this show Roger Daltrey donated nearly $500,000 to the Teen Cancer America, a foundation started by Daltrey and the Lurie Cancer Center at Northwestern Memorial Hospital to help expand its adolescent and young adult cancer program. Daltery started the organization to provide assistance to teen cancer patients world-wide. So, it's clear, Roger Daltrey has been and remains busy on many fronts.

Daltrey is quoted saying he was glad, “Tommy found him again” after all these years. I’m glad it did as well. It was a fun and memorable musical event.

Roger Daltrey & the Who Band with The Wolf Trap Orchestra 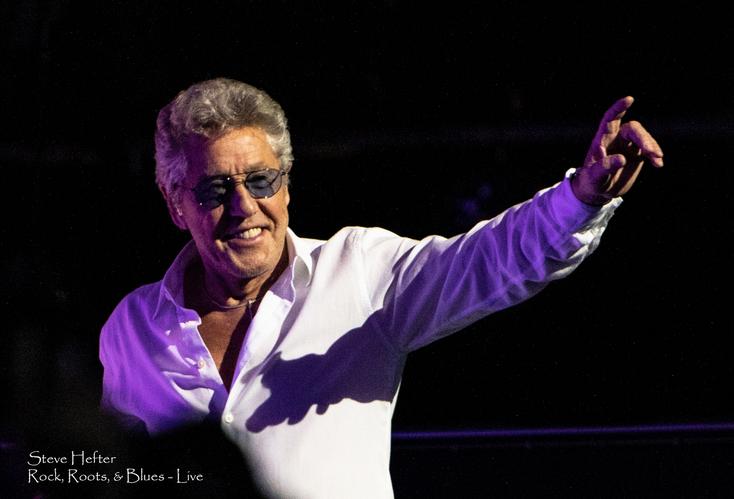