Lake Street Dive began our summer at Wolf Trap and brought the fantastic Wood Brothers to open the show. Any time I can see The Wood Brothers I try and make it - they are just that good.  Brothers Oliver and Chris Wood and Jano Rix have created something unique and distinctively fun with a way of writing and performing that feels like the way it should be done. Organic songs which all tell a story (another common trait in some of the best musicians) played with gusto, raw talent, and humor.

The amount of energy expended on stage must be proportional to just how much the music grabs them and pulls them along. It's easy to feel that when Chris goes into his signature "dance with the bass and not" frenzy. It's something to see and a testament to their love of the music. Jano Rix may be one of the most talented all around musicians I've ever seen. At times playing the drums with his feet and one hand, while playing the keyboard with the other all while singing can switch in the next tune to him playing the washboard or playing the melodica. Oliver Wood is the mellow captain, playing the guitar and singing - telling a story in song - sometimes straight forward - sometimes a bit deeper, always enjoyable. Oliver and the guys can rock out as well. When full-out electric, these three can fill a huge amphitheater like Wolf Trap with solid sound. Oliver commands the stage during his slower songs as well.  I am having a blast watching (and listening) to these three musicians progress and grow. 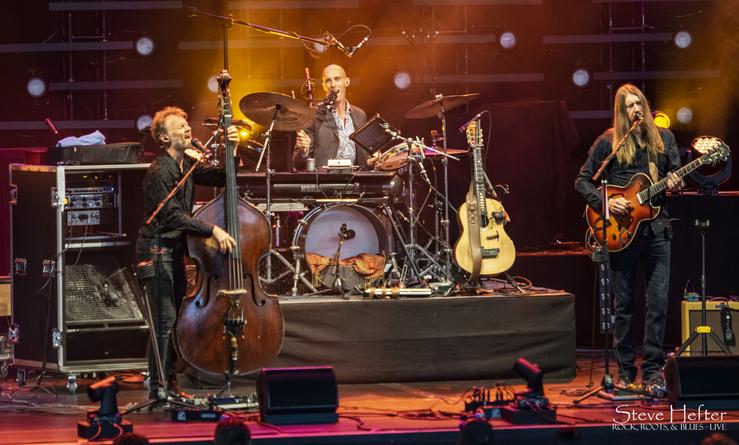