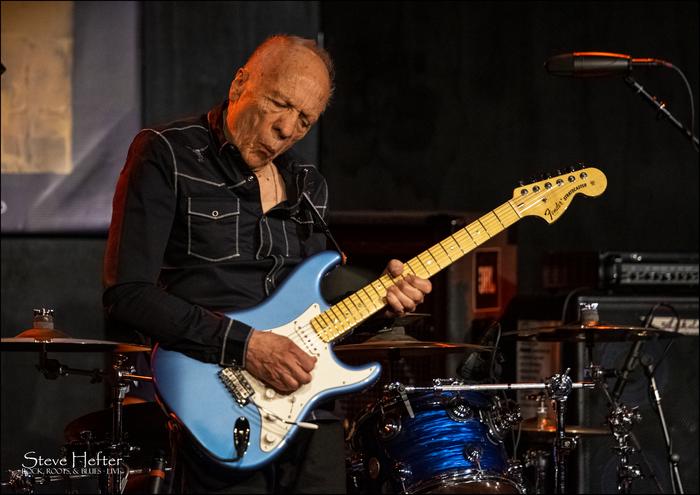 On April 2, 2019 Robin Trower's long awaited U.S. tour kicked off at The Birchmere in Alexandria, VA. Robin hit the stage with a huge smile and you could tell the next 90 or so minutes were going to be special. He opened the show with "Too Rolling Stoned", one of my personal favorites, and a tune that made it's appearance on the Bridge Of Sighs album released in 1974. When I first started seeing Robin play he always looked so serious, totally into what he was playing, and rarely was there any interplay between he and the audience. In the last 15 years or so, and in particular the last five, he has been noticeably happy, acknowledging the audience, smiling, appearing totally relaxed and at ease.

While he may have lost a touch of speed, his tone and technique have been honed into a seamless force of guitar mastery. I've seen Robin somewhere around thirty times and he constantly amazes me. One of the true guitar legends from his era, he is still pushing the boundaries of his playing and in his writing. His last several albums have featured Robin doing it all, except playing the drums. Writing, playing the guitar, bass, and singing, he clearly knows what he is after with each new release.

The second song was "Diving Bell" from his recent release, Coming Closer To The Day. Personally, I think Robin's singing is brilliant, and he is able to impart what he is feeling through his vocals as well as his guitar. The show included a nice mix of old "hits" and songs from his recent albums. The crowd clearly showed their respect and admiration for a musician that has been at his craft for well over 50 years, beginning with the band, The Paramounts, which he formed back in 1962.  There are not many musicians around with the talent and passion that Robin Trower has, let along the fact that he has been playing music nearly his entire life.