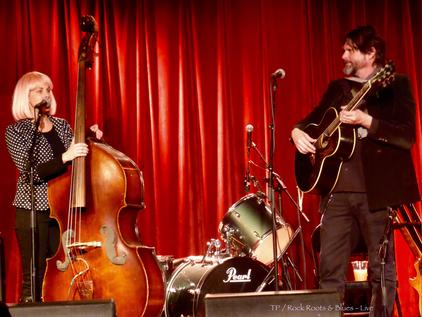 Amy LaVere has been doing double duty this year. She has been playing upright bass with Luther Dickinson and The Cooperators as well as performing her own repertoire, with guitarist Will Sexton, as the opening act on Luther’s tour. She has been getting a welcome reception for her hard to categorize music – a little bit country/folk/gypsy jazz/southern soul “Americana”.  Her most recent recording, the semi-autobiographical “Runaway’s Diary”, was produced by Luther Dickinson. On the last leg of her tour with Luther, Amy and Will Sexton sat down with us for an interview after their show at The Bell House in Brooklyn, NY.

An Interview with Amy LaVere & Will Sexton

RRB:  OK. We’re here with Amy LaVere and Will Sexton at The Bell House in Brooklyn, NY.  You’re touring with Luther Dickinson and The Cooperators  and you’re also opening for him. Can you tell me how your relationship with Luther has developed?

Amy:  Well, actually I knew Luther’s dad before I knew Luther. Luther and I may had met once or twice, but it was my relationship with the Dickinson family. My relationship began with Jim Dickinson. He (Luther) had seen me play bass, and it started with him having me back him up. We had several engagements, and, you’d never know what songs, he’d just … I’d just fall apart and figure it out – every single song – halfway through the song I would know it, I think he just liked that loose esthetic, hearing everything come together. It was a privilege. I’d played with him and he ended up producing a record for me.  Luther toured,   he’s always toured so much, so our friendship developed real slow. We’d randomly cross paths and got to know each other. Then he did these two solo records he’s let me play bass on, He keeps hiring me to play bass on records he produces for other artists.  A great one he just did is a record for Samantha Fish. That’s a record coming out. That was a really fun project. It’s a joy to tour with Luther, he also, like his dad, likes to keep things real fresh, and simple and strong, kind of see which way the wind blows you. You’re out there, which is fine, it’s never over rehearsed. It’s always like, it’s a blast. You just have to really keep your ears open, and then, and pay attention and get in the river and row.

Will:  He’ll switch the set up constantly, you never know what’s going to happen, but it’s like keeping everyone, he’s so nurturing, in the way he produces, and the way he runs his show, it’s like….. he makes it fun.

Amy:  He has a gigantic master set list, and we don’t follow a set list. The closest thing is he’ll say “you’re gonna come out after this song”, so at least I know the cue of which song I’m going to enter the stage. After that, all bets are off. Even before that, all bets are off. He just goes with how he feels, what’s working for the night.

Amy: Yeah, that sounds right. Is it already that long ago?

Amy:  Jim, Luther’s dad, was going to produce this record for me, and he passed, and I made the next record with Craig Silvey, a record called “Stranger Me”, and I’m really proud of that record. I love that record so much. But the next record I wanted to be more roots oriented. The material just sounded very earthy, and, funny enough, I actually didn’t think of Luther initially. But we ended up in a situation where we were just talking about it, and just after the conversation I was thinking ‘why haven’t I thought of Luther for producing this record. And he actually mentioned, “well, if you’re looking for a producer…”  And, ah, yeah, Hey, yeah, that’s a great idea, let’s do that.

RRB:  So that was done down in Memphis?

Amy:  Done in Memphis in part, and we did some of it in Cold Water, at the studio there, Zebra Ranch.

Amy:  Well, actually, in a round-about way we almost have Luther to thank for that, too. When he pulled together the band The Wandering. It was Sharde, Valerie June, Shannon McNally, myself and Luther. After that tour was finished, Shannon and I decided to do a run together. I brought my drummer and she brought Will to play guitar on that run, and I was backing her up on vocals and bass on her songs, and she would play guitar and sing on mine. So Will was out on the road with us for over a month. When the tour was over I was like, ‘wish he was around all the time’. So we kept in touch and several months later he became part of my family. We married.

Will:  Amy brought me from Austin to Memphis to play a little bit on Runaway’s Diary.

Amy:  Yeah that was the next time we hung out – was on that record.

RRB:  So, how is it touring together?

Amy:  It’s super, super easy. It’s the best. There’s times I miss the full band, but this is a dream, just Will and I. It’s made me a much better bass player, actually, to not have the luxury of a drummer, you know.

Will:  Also, this tour’s been the complete ideal situation.

Will:  We can do it all. It’s been beautiful.

Amy:  I’m really grateful for the duo thing And we have so much fun. He’s so easy. Super easy.

RRB:  Alright. So you guys have something new that you’re putting out soon?

Amy:  Well, “Hallelujah, I’m A Dreamer” is a record Will and I did together specifically because people would come to the merch table after the duo show and would say ‘what sounds most like what we just heard?’  And all of my records were full production records. So we basically jumped in the studio in two days and just did what I guess is a compilation of songs from my records and some new material and made this duo record. Yeah, I’ve got a mountain of new material that I’m hoping will find a home on a new record in the fall. But I’ve honored all five records on my first label, Archer Records, whom I’ve adored.  I’m anxious to see if the new year has a different path for me,  next year.

RRB:  Very good.  So how long will you be continuing the tour with Luther?

Amy:  This tour has close to two weeks left. Then we’re in South By Southwest for the long weekend, and then Will and I go to Europe for two months, to do the duo thing again.

Amy:  Luther’s already got some shows on the books coming up in the summertime.

RRB:  Good. Well, I’d like to thank you very much for talking to us.

Amy:  Nice talking to you.

See all the photos from the show.