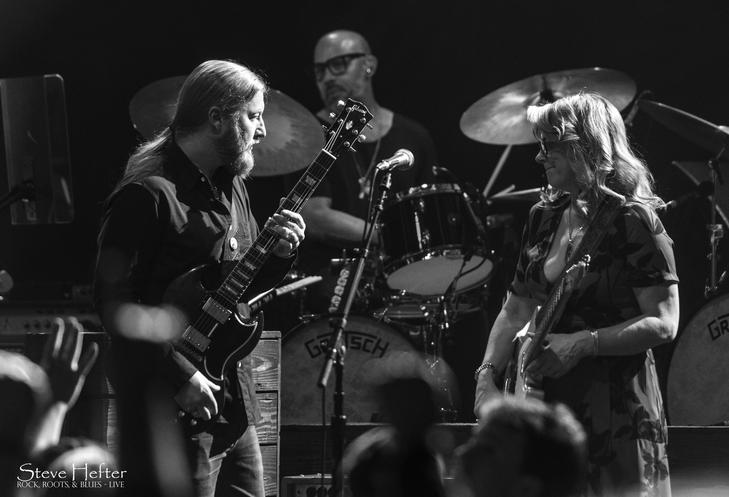 Occasionally, the opening song of a show can set the tone for the rest of the night, so when the Tedeschi Trucks Band opened their February 23, 2019 show at the Warner Theater with "I Walk On Guilded Splinters", I had a feeling it was going to be an extra special night of music. I was not wrong.

On tour in support of the band's new album, Signs, and with the recent loss of Kofi Burbridge clearly still affecting them, Derek and Susan led the band through two emotionally charged and musically superb sets.

Set 1: I Walk on Guilded Splinters; Do I Look Worried; Part of Me; When Will I Begin; Walk Through This Life; Down in the Flood; Loving You Is Sweeter Than Ever; Strengthen What Remains; Idle Wind.
Set 2: They Don't Shine; High & Mighty; Dreams; Sweet Inspiration; Made Up Mind; Shame; Midnight in Harlem; I Pity the Fool; Bound for Glory; ​

Enc: With a Little Help From My Friends

You can listen to the show as recorded by our friend Alex Leary on archive.org:

Playing the keyboard was Gabe Dixon who did a wonderful job. One can only imagine the emotions surging through him as he played Kofi's parts. In true Tedeschi Trucks style and class, the final show of the winter tour in Asheville, NC on March 2, 2019 was the same set list the band played on December 1, 2018 in Boston, which, as it turned out, was the final performance by Kofi with the band.

On February 15, 2019, at 57 years old, Kofi Burbridge died of complications from ongoing cardiac problems.  A long-time member of the Tedeschi Trucks band, Kofi also played in the Derek Trucks Band.  Kofi played several instruments, and sang, but is best known for his inspired, passionate, uplifting keyboard magic as well as his remarkable talent playing the flute. There truly is a large family of musicians surrounding Derek and Susan, the other band members, The Allman Brothers Band family, people associated with The Aquarium Rescue Unit, and many, many musicians and non-musicians alike. Kofi and his brother Oteil played together for several years in The Tedeschi Trucks Band.

The news of his passing hit many people extremely hard. Shortly after learning of his death, the band took the stage at The Warner Theater in DC, visibly shaken. This was the first show of what has become an annual mini-residency at The Warner.  We here at Rock, Roots, & Blues - Live send our deepest condolences out to Kofi's family and friends. The man, his talent, and his passion will be greatly missed.