Lil’ Ed and The Blues Imperials

I was anticipating going to the small, historic Sunrise Theatre In Ft Pierce, Florida.

I got there early surprised to see quite a crowd milling out front and a couple of lines of people on their way in. I quickly jumped on line and with only a few people ahead of me it wasn’t long before I got to the woman taking tickets, but something seemed off. She started looking at my ticket funny and I leaned in to check the date on the ticket to make sure I was there on the right night.

She then got the attention of the other ticket taker for the line close right next to us, and she directed me back outside to the adjacent entrance where I was passed in with my ticket. It’s called The Black Box, an intimate 200 seat room. It was 10 rows of folding chairs in the middle, and maybe the same amount of rows to both the left and right.

The stage is set in a classic blues band arrangement - amps guitars and drums. I like getting to a show early and check out the setup and feel the anticipation for the show. I notice what looks like very nice pin-up girls on the rack tom. The bass drum head has a little Lil’ Ed and The Blues Imperials sticker and a larger KL for the drummer Kelly Littleton. The guitar setup to my left of the drums has two guitars in their stands and some kind of artwork on the bottom of the guitar that looks familiar but I can’t make out, even though I’m real close. I have a hunch though, so I took out my trusty iPhone that my son recently gifted to me because he thought I was a Neanderthal with an Android. I took a photo, checked it out upside down, and there was another very nice pinup girl. The guitar and bass guitar on my right of the drums were standard looking.

I’m know more intrigued than ever. I started wondering if I’m too close to take good videos. Who cares, I quickly decided. I’m going to take in the music right there three feet from the stage and maybe eight or ten feet from the drums and amps.

I have a couple of Lil’ Ed cd’s and I saw them once at a Blues Festival and I’m expecting standard blues played by tight, veteran blues band.

As the first set unfolds, the band played mostly shuffles with Ed playing some Elmore James style slide guitar. You don’t hear that played well too often. Lil’ Ed has a little schtick to his act but he uses it sparingly and it adds to the performance. The thing is he’s having fun and seems genuinely happy to be playing the music. I was impressed by the professionalism of the band.

I noticed the dice attached to the top of the cymbal stands. The little things, the attention to detail, count for a lot also.
You know when at intermission you take a toke or two and when the band kicks back in they sound even better than before? Well, that was happening to me. But it’s not just me, Ed has cranked his guitar up
(and the bass and vocals a bit too).

And it’s sounding good. And it was better than the 1st set. He really had that guitar cranked up. Ed seemed even happier.

I was going to move back for the 2nd set to get the whole band in the picture and maybe it would sound fuller a bit back. But I was now mesmerized by the band right in front of me. I’m ten feet from Lil’ Ed’s amp and I decided to stay.

Playing mostly songs from their latest release The Big Sound Of Lil’ Ed and The Blues Imperials, they are smooth, with a great feel. Tight, yet relaxed. The four members first started playing together 30 years ago, and have been playing together steadily for the last 20 years. They are a classic Chicago blues band.

The information on Lil’ Ed’s website is the truth:

With THE BIG SOUND OF LIL’ ED & THE BLUES IMPERIALS, the band continues to bring their blistering Chicago blues to “Ed Heads” new and old. 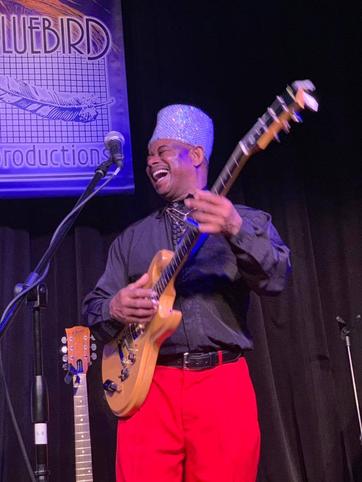