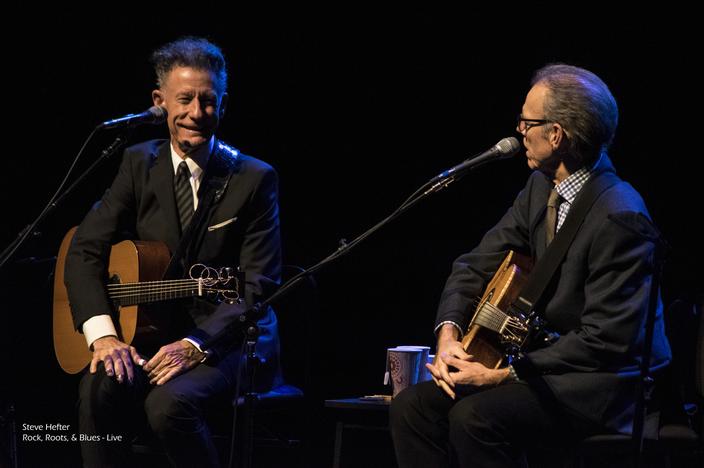 Lyle Lovett and John Hiatt played the Strathmore Music & Arts Center in Bethesda, MD on January 19, 2017, and it's no surprise that the show was sold out. Clearly long-time friends, the two took the stage from opposite sides, shook hands, waved to the audience, sat down, and proceeded to catch up with one another. "Hi John. How are you?" "Fine Lyle. I'm doing good. And you?" "I'm good John. I'm still catching up to the schedule. What did you do today?" "Not much, I stayed on the bus. The mother ship! I hate hotels" This was the first of many times the audience laughed out loud with the pair, and set the tone for the show. The two wonderfully talented songwriters, vocalists, and guitar players traded tunes, stories, and were clearly having a genuinely good time.

What a treat for the crowd that spanned all ages - from older couples, to young parents who brought theirs sons and daughters out to see two legends. ​ As I watched and listened, I realized that these two gentlemen are, perhaps, the most talented pair of singer/songwriters around - each with a long history of making wonderfully lyrical and inspiring music. I distinctly remember closing my eyes and imagining the two of them sitting around a campfire in shorts and t-shirts, instead of in suits and ties playing to almost 2,000 people in the beautiful theater. They each played songs from their vast repertoires alone as well as playing several pieces together, trading vocals and guitar solos. Their tour continues through March 10 and if you have the chance - get out and see these two iconic American musicians!