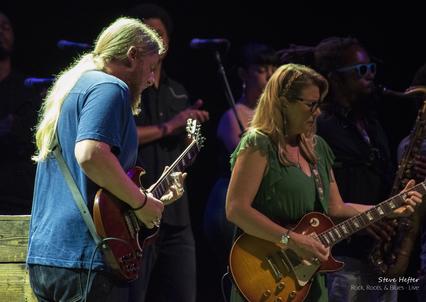 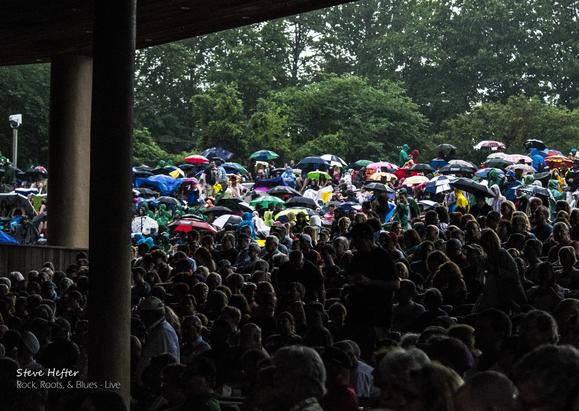 The band left the stage for the encore break but it was clear the crowd wanted more. Susan emerged with newcomer Frank (Keys) to perform a stunning duet of "A Song For You" by Leon Russell. The rest of the band members then slowly sauntered on stage for what would prove to be the last song of the night. The Wood Brothers joined TTB in closing out the show with a heartfelt version of Bob Dylan’s "You Ain’t Goin’ Nowhere" that turned into a singalong.

As the rain continued to fall, the crowd filed out of The Filene Center with smiles of joy and disbelief, likely thinking “I want more”. Once again, the formidable 12-piece collective known as the Tedeschi Trucks Band solidified their spot as one of the most powerful live ensembles touring today. Simply stunning.

Setlist:
I Want More, Do I Look Worried, Midnight In Harlem, Don’t Know What It Means, Get What You Deserve, How Blue Can You Get, Will The Circle Be Unbroken, Bound For Glory,

Key To The Highway ^, I Wish I Knew (How It Would Feel To Be Free), The Storm > Whipping Post

– Carey Frank played keys in place of Kofi Burbridge.
– ^ with Hot Tuna
– * Susan and Carey duet
– $ with the Wood Brothers.

​See all the photos from this epic night here. 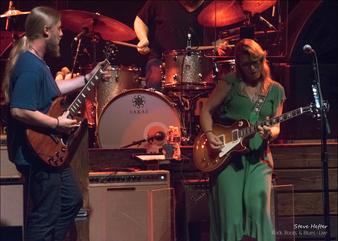 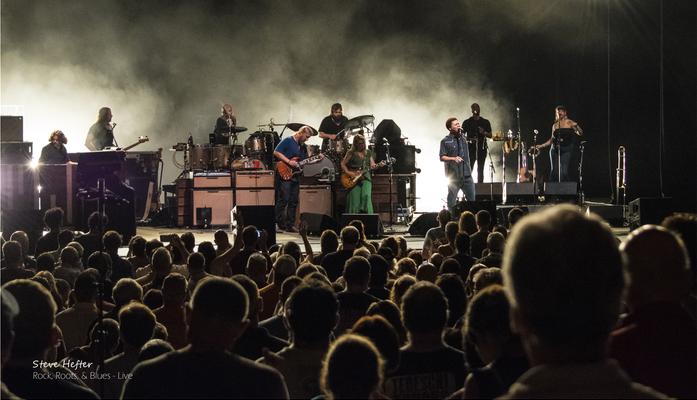 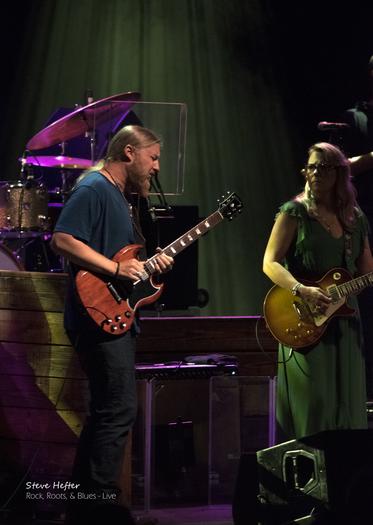 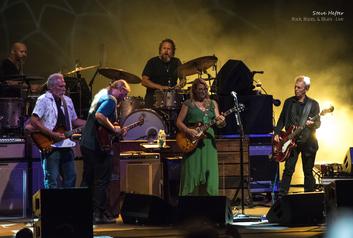 It had been a year, nearly to the day, since the Tedeschi Trucks Band brought their Wheels of Soul tour to the majestic Wolftrap National Park in Vienna, VA. This time, they brought their friends Hot Tuna and The Wood Brothers to join in the fun.

The Tedeschi Trucks Band has been honing the power of their 12-piece band that now operates like a well-oiled machine. With husband/wife duo Derek Trucks (guitar) and Susan Tedeschi (vocals, guitar) leading the charge, TTB has been on an upward trajectory for the better part of a decade. While there has been minor personnel changes over the last few years, the most recent change has been the addition of Carey Frank, filling in on keyboard duties for Kofi Burbridge, who suffered a heart attack in late June. Kofi has been recovering and will Ultimately return with the band when the time is right.

The energy inside the Filene Center pavilion was palpable as the band emerged to a standing ovation. TTB came out of the gate firing with a thumping "I Want More", off the 2016 Let Me Get By release, with the crowd echoing Susan Tedeschi’s sentiments as she belted “Don’t you hold it inside”! The band settled in nicely with an inspired rendition of "Do I Look Worried"; Susan’s vocals were strong and the band appeared locked in early. Then came the sounds of Derek’s cherry Gibson SG vibrating to the tune of "Swamp Raga" with a hint of "Little Martha", serving as the intro to "Midnight in Harlem", always a crowd-favorite. The audience sat in total silence inside the pavilion, as a crescent moon projected on stage above the band. As Derek began to weave his intricate web, you could feel the crowd’s undivided attention descend upon the cerebral guitarist. Derek’s solo proceeded to build in intensity before reaching a seemingly unattainable tone, reminiscent of a soul singer crying out with unbridled passion and ecstasy. The crowd was left in awe at the sheer genius of Derek Trucks once again. 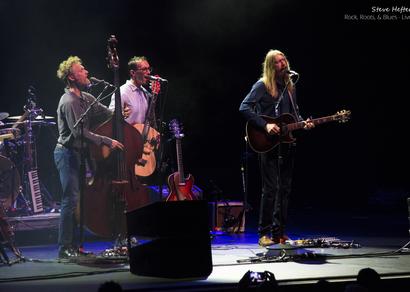 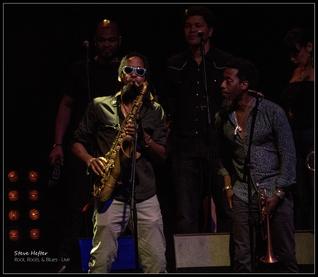 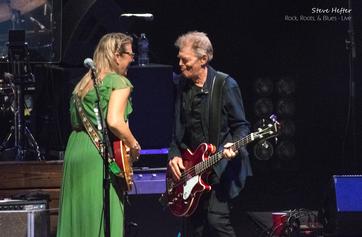 "Don’t Know What It Means" followed, with Susan playing a meaty solo on her Fender Stratocaster. The background vocals of the Mark Rivers, Mike Mattison and Alecia Chakour trio were on display before Saxophonist Kebbi Williams to us for a ride with a psychedelic solo full of numerous twists and seemingly unnatural turns. As the band dissolved, up came Mike Mattison to sing vocals on "Get What You Deserve". It proved to be a blistering version, as Susan and Derek traded licks while the drummer tandem of JJ Johnson and Tyler ‘Falcon’ Greenwell helped fuel the freight train that was barrelling down the tracks. Next, the band slowed it down a bit for a tribute to the late B.B. King with a rendition of his staple, "How Blue Can You Get". The crowd paid its respects with loud roars as Susan wailed on the mic, before she proceeded to take an extended solo on her recently acquired sunburst Gibson Les Paul. The crowd came to its feet with applause and cheers to acknowledge the amazing performance they were witnessing.

The warm, haunting tone of Derek’s guitar brought the crowd back down to listening levels, as he began an extended intro to the communal "Will The Circle Be Unbroken", with hints of "Amazing Grace" mixed in. The band took the crowd to the church of the Tedeschi Trucks Band with a special rendition of the traditional tune. "Up next was Bound For Glory", off of the debut album Revelator. Once again Susan’s pipes were on display, before Carey Frank impressed with an extended organ solo of his own. After yet another incendiary solo by the former Allman Brother, the band welcomed Jorma Kaukonen and Jack Casady (Hot Tuna) to the stage for a take on "Key To The Highway" that proved to be a huge crowd pleaser. It was apparent that the band was ecstatic to share the stage with two rock and roll legends. A take on "I Wish I Knew (How It Would Feel To Be Free)", a Nina Simone classic that became a Derek Trucks Band staple, was next. The crowd was uplifted as singers Rivers and Chakour stunned with a soul stirring vocal battle towards the end of the song. The band was running at full speed during the set-closing rendition of "The Storm", off of the band’s second album Made Up Mind. While always a scorcher, this rendition of the tune would prove to be a nostalgic treat. Derek transitioned from a fiery solo into an exploratory one, using his volume knob to create dramatic swells that reverberated in the pavilion. The crowd buzzed as the drums and thundering bass (Tim Lefebvre) set the stage for Derek to play the opening licks of "Whipping Post", the Allman Brothers Band’s epic, all-time rocker. Excitement ran through the crowd as Derek paid tribute to the late pair of Allman brothers, Duane and Gregg. The band swelled as Derek performed an ungodly solo for the ages. The audience could hardly contain themselves as the song reached its peak with Susan belting “I feel like I’ve been tied, to the Whipping Post!” to raucous cheers. 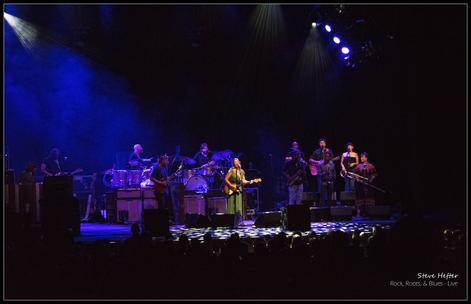 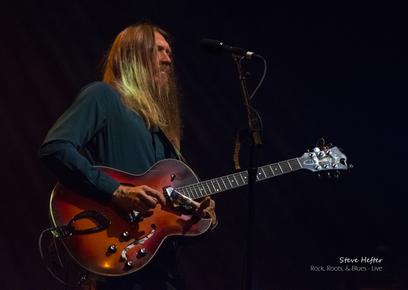