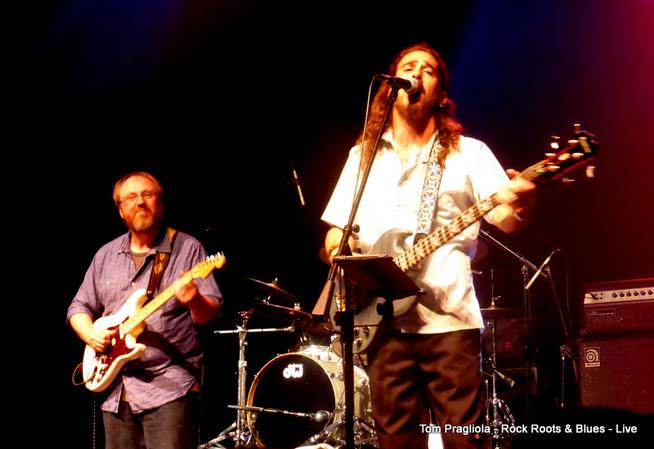 “Playing with Butch Trucks is a joy. He's fun, He kicks butt on the drums and is just fun to hang with. For me it's like coming full circle. He, Jaimoe & my father were the backbone of ABB. The way they grooved together was, and still is, amazing, and to be able to stand in my father’s place next to Butch, well, words can not describe the feeling. It's wonderful. Working with Butch is just as fun. He invited me to Roots Rock Revival (music masters camp), and I had such a wonderful time and learned so much, as well as getting to hang and enjoy some down time with Butch. Hearing the stories he and my father shared.

The Paramount show was just so much fun. I feel so honored. I mean i got to share the stage with Butch, Bruce Katz!!! and of course Vaylor Trucks... WOW, Vaylor is not only a wonderful, talented, intelligent person, but a joy to work with. There was no stress at all. We had fun with the tunes and did them our way and it was just so much fun on so many levels.. I'm looking forward to many more with Butch.”

“It was an amazing week. The place to start is last winter. Butch had a spot at the upcoming Wanee festival and the original guitarists he had in mind could not participate. Combine that with the fact that this would be the first Wanee in which there would not by a set by the Allman Brothers Band - and also the fact my trio would not be participating - and I think Butch kind of included me out of sympathy (and more than a little nepotism.) That's not to say that Butch didn't realize I could play. He just hadn't really heard me play in that capacity. Up to that point, he had only heard me in two different contexts; with my trio, (The Yeti Trio), where I play fast, complicated music that doesn't always have a lot to do with roots / Blues based rock - and the times I'd sat in with the Allman Brothers. It is not false modesty to say that my performances in that particular capacity have been less than memorable. So I think at Wanee he was a bit surprised to learn that, when I have control over my sound and have actually rehearsed, I can play this music pretty well. That's why he thought of me for the show at the Paramount. The fact that I could also get the time free to drive up and attend the Peach Festival, then drive us to New York for Roots Rock Revival, Music Masters Camp), then out to Huntington all became just a bonus. Needless to say I am beyond thrilled that I was able to be there for that entire week. The Peach Fest set and the birth of "Les Brers" was fantastic, and I cannot express how happy it makes me to know that such a thing as Roots Rock Revival exists on this planet. They've really created something special, and I could not be more thrilled to be part of it going forward. For the Paramount show, the thing I thought of most as the time began approaching was the fact that there would be a crowd there to see Butch Trucks, and for the majority of the set I would be the only guitar - AND I would be playing a Fender. One thing that helped was that we all agreed early on that we did not want to do an entire set of Allman Brothers songs, and as we started going over other possible tunes, I started getting really excited about the prospect of being able to stretch with this quartet. As for the performance itself - I mean what can I say. First, the venue is absolutely amazing, the staff are fantastic, and even the owner was a joy to work with. Bruce and I sat down with the list of tunes we'd agreed on and hammered out the set list, which I think worked out great. Berry's bass sounded fantastic. Bruce was as fierce and subtle as he ever is (what a great player), and Butch - I mean what can you say. He swings like a pendulum, he has a shuffle that drives harder than any drummer ever, and he knows how to nail it down when we all get lost. He really is the archetype of the jam band drummer - and playing with him is thrilling, an adventure, something that requires your complete attention. The crowd was great. Both Heather and Lara did a fantastic job. Being the center of attention for Jessica and Dreams was a bit intimidating, but I am happy with how they both came out. In short, I am thrilled and honored to be a most-time (if not full-time) member of the Freight Train Band.”