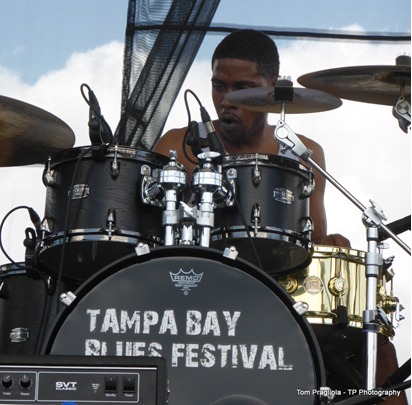 I missed the opening day music at the park grounds, arriving in St. Petersburg, FL with enough time to check in to my hotel, have a nice steak dinner, and find my way to the first day’s aftershow – at The Palladium Theatre in downtown St. Petersberg. Matt Schofield, Coco Montoya, and Selwyn Birchwood – each performed a one hour set in an intimate theater setting. Damn, this could be better than the Festival itself.

1st Set: Matt Schofield – internationally acclaimed guitarist and certainly one of my all-time favs. Matt’s Trio played the Festival that afternoon. He comes out smokin’ as usual and is joined later in the set by 11 year old guitar whiz Brandon Neiderauer.  Trip to Tampa already deemed a great idea and worthwhile endeavor. Matt, with Jonny Henderson on B-3 and Kevin Hayes on drums, …. folks, it don’t get any better than this. Please go see Matt play when you get a chance. You will not be disappointed. I guarantee it.


Coco Montoya and his band, then local hero, Selwyn Birchwood and his band both play excellent one hour sets. Coco was mentored by Albert Collins and John Mayall, has a clear, rock-oriented voice, and plays left handed and upside down. Selwyn seems like a natural, but I’m guessing he works hard at his craft. It’s now 1:00 am. It’s been a good night.

The next afternoon at Vinoy Park, in the beautiful, warm Florida sunshine, I enjoy the Festival atmosphere and the music of Lil’ Ed and The Blues Imperials and Tommy Castro and The Painkillers. Both of these band’s have been together for 20 to 25 years and it is an extra special treat to experience band’s with that level of experience as a unit. One of the true pleasures in life. Band’s at the Festival are playing one and a half hour sets. It’s only been a week since Biscuit Fest and I’m taking in the great music in three hour doses.

With another day’s music coming up, I decide to leave the Festival to meet up with a cousin I don’t see very often who lives in Clearwater. We go out and have a phenomenal sushi dinner at the Island Way Grill in Clearwater Beach.  I am getting spoiled. I’m thinking of retiring to the good life in Florida.

Ahh, it’s now Sunday and it’s another sunny, 80 degree day. I start the day off with a swim after breakfast at the motel pool. Am I really going to go out and see and hear more great blues and funk and soul? Damn, here I go. George Porter, Jr. and Runnin’ Pardners. If you know who I’m talking about I don’t need to say more.  George Porter, Jr. – bass, Michael Lemmler – keys, Brint Anderson – guitar, and Terence Houston – drums.  Some of the greatest funk on the planet by the master bassist. They are joined on a couple of songs by 11 year old guitar whiz – Brandon Neiderauer. George, and the entire audience,  seems genuinely amazed how Brandon plays, with expressive feeling. Tad Robinson was next up. He may not be a household name, but he’s playing some great soul blues. A great vocalist and harp player. A great band. Wow.  A side note: it was getting hot (not just musically, but temperature-wise), and after a non-stop intense, passionate 90 minute set, I observe Tad grab a bottle of water and immediately go over to the merchandise tent and spend 30 minutes greeting fans and autographing CD’s, and other miscellaneous items including the shirts on people’s backs. It’s a reminder of how hard these musicians work and how much they give to make a living in the music business. Big Sam’s Funky Nation come out next and they do get the crowd whoopin’ and hollerin’. Two horns, guitar, bass, and drums. Big Sam on trombone. It’s getting hot and sweaty. I need food and drink. The party is in full swing, and there’s more to come.

A question I had mused about out loud the week before at the end of Biscuit Fest – is it possible to overdose on good music? – is now answered in the affirmative. Yes!    But it’s not a bad thing!