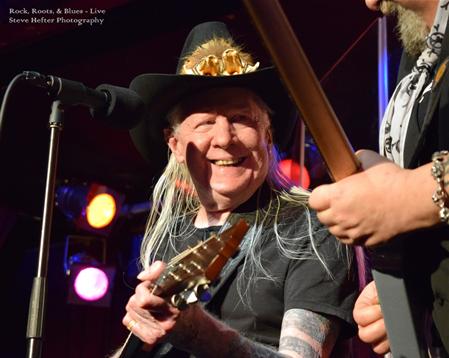 After meeting up with Johnny for our interview on February 15, 2014 at Rams Head On Stage in Annapolis, MD, we were invited to attend the celebration at BB Kings in NYC on February 23, 2014. The festivities were a combined 70th birthday party and 4 CD Box Set release party. The Box Set – “True To The Blues: The Johnny Winter Story” is a retrospective of Johnny’s career.  Oh yeah, and The Johnny Winter Band performed a long set of great music as they have been doing night after night on their current tour. Not bad for a guy many thought was gone and seemed to be somewhat forgotten. Johnny’s back and Still Alive and Well!

Usually the band opens up with a scorching rockin’ blues song before bringing Johnny out, but on this night Johnny came out about 30 seconds in, and when he was seated Johnny and the band played a short instrumental as an introduction to the set and then quickly launched into “Johnny B. Goode”, followed by “Good Morning Little School Girl”. That was a clear statement that Johnny and the band  were here and were digging in.

The band behind Johnny are all extremely talented musicians in their own right: Tommy Curiale on drums, Scott Spray on bass, and Paul Nelson on guitar, who also happens to be Johnny's manager and is widely credited for helping bring Johnny and his career "back".

Next, the band was joined by guests Popa Chubby on guitar and Frank from The King Bees on harp for “Got My Mojo Working”.  A good time was being had by all. The next song was Ray Charles’ “Blackjack” with guests Debbie Davies on guitar and harpman James Montgomery.  The band then did the Howlin’ Wolf classic, “Killing Floor” with guest Lance Lopez (who also did an opening set), and Johnny and the band did the old-time rock n’ roller “Boni Maroni”.

Fellow Texan, guitarist Mike Zito, from Royal Southern Brotherhood, and his own band, Mike Zito and The Wheel, joined the band for a raucus “Jumpin’ Jack Flash”.  Johnny then performed a medley of “I Wanna Know” into “Gimme Shelter”, followed by “It’s All Over Now”, with guest Joe Louis Walker on guitar. In case anyone forgot, Johnny has always loved doing songs by The Rolling Stones, and this night was no exception.

Mid-way through the set, the music stopped, and all the guests joined Michael Packer of the New York City Blues Hall of Fame and Bill Wax from Bluesville, Sirius XM radio on stage – at which point Johnny and the band were ceremoniously inducted into the New York City Blues Hall of Fame. This was followed by Mike Zito presenting Johnny with a Delaney wedge guitar and Mike saying to Johnny, ”You once said you sort-of liked playing this, so I got you one ”.  After which Johnny’s wife Susan brought out a cake and the audience joined in signing “Happy Birthday To You”.  Johnny seemed to be genuinely enjoying this well-deserved moment.

For the closer, NYC bluesman Jon Paris on harp joined Joe Louis Walker and the band on the Elmore James classic “Dust My Broom”, as Johnny switched from his custom made Dean Zekinsky Private Label guitar (which Dean Zelinsky made especially for Johnny as a gift earlier in the year) to slide guitar on his classic Firebird. There’s a little extra magic and excitement when Johnny plays slide guitar and the sound of the slide brought the intensity up even further. The encore consisted of hard-drivin' versions of “Highway 61 Revisted” with Johnny both slidin’ and rockin’.