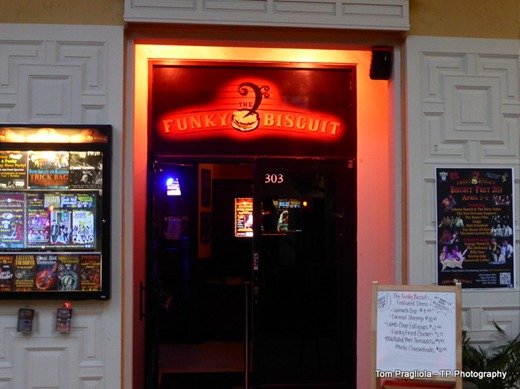 The third annual Biscuit Fest was held from April 3 through April 6 at The Funky Biscuit in Boca Raton, Florida.  The party was on with a funky good start on Thursday night with The Biscuit Fest All Stars band consisting of George Porter, Jr., Billy Iuso, Ron Holloway, Roosevelt Collier, and Maurice Dukes playing a hip-swaying, hands-in-the-air set of  New Orleans funk and jazz.  Johnny Sketch and The Dirty Notes kept the party going with their horn-driven jazzy funk.

The Funky Biscuit has earned a reputation with artists and fans alike as a great place for music.  It’s an intimate venue that’s comfortable, has great service, books top quality bands, has a relaxed vibe, and has great sound. Club maestro Albert Poliak obviously cares about the music, the musicians, and the clientele.

Artists performing over the four day festival included The Heavy Pets, Lingo, New Orleans Suspects, The Josh Garrett Band, Twocan Blue, and Fox Street. Sunday, the final day of the Fest, began at 3:00 in the afternoon with local favorites, David Shelley & Bluestone. The band, one of the hardest working bands on the Florida scene, was coming off an extended break due to personal issues, and The Biscuit was packed with friends and family ecstatic to have them back. The set started with “War Party” and included band staples “High Alert”, “Black Water Woman”, their reggae version of “Whipping Post”, “When I Was Your Superman/Trick Bag”, “I’m Ready”, and “Too Far Gone”.

After 7 hours of music Biscuit Fest closed that night with an almost two hour set by the internationally acclaimed Matt Schofield Trio – Matt on guitar and vocals, Jonny Henderson on B-3 and bass keys, and Alain Baudry, drummer from the CD “Heads, Tails, and Aces” session.  Matt’s set included originals “Don’t Know What I’d Do”, “Betting Man”, “Live Wire”, “Siftin’ Thru Ashes”, “Where Do I Have To Stand”, “What I Wanna Do”, and covers of Albert Collins’ “Lights Are On”, and “Black Cat Bone”, and Elmore James’ “Stranger Blues”. Matt has stated that The Funky Biscuit is one of his favorite venues to play and he was loose and relaxed and obviously enjoying the experience. Guests - guitarist Jeffrey Primer, saxman Ron Holloway, and harpist Rockin’ Jake, joined Matt for part of the show. It was an exclamation point on four days of great music.
An  open jam followed for anyone left standing with local musicians joined by Matt, Billy Iuso,  Ron Holloway and others. It was an incredible four days! Get thee to The Funky Biscuit anytime you can.