It seems appropriate that this year, 2019, the year of Woodstock and of remembering hippies, peace, love, and music, we

we were able to go see electric Hot Tuna - fifty years since their beginning - play to a packed house at the Warner Theatre in Washington, DC. This is the area where Jack Casady and Jorma Kaukonen grew up as best friends. Almost more fitting is seeing them together with Dave Mason. The rock and roll history these three men have not only lived through and seen, but helped define, has filled the pages of dozens of books and has appeared in countless documentaries and live broadcasts. Jack and Jorma have remained best friends throughout their lives, as part of Hot Tuna or as the driving force behind the music of Jefferson Airplane. The chemistry between these two is clear. It's not what you see them doing or saying to each other, it's the communication that you can't see between them, only hear, that is just so unique.

Opening the show with "Been So Long" which is also the title of Jorma's recent autobiography, Jack, Jorma, and drummer Justin Guip set out on an amazing 90+ minute journey through a small sampling of their vast music catalog. Seemingly effortless for the band, this show was plain fun to watch and hear. Jorma's guitar playing is as good or better than it's ever been and, coupled with his distinctive organic voice (occasionally reminiscent of Pete Seeger), Jorma sounded wonderful. Jack is pretty stoic as he holds down the beat while riffing off of it at the same time. He is able to match, compliment, and lead Jorma's playing, taking the perfect role in each song, even switching within songs. They actually get very close quite often and play while staring into each other's eyes. As if they are seeing the music inside each other. Deep - but true. Their current rock-and-roll drummer, Justin Guip, compliments Jack and Jorma perfectly. Bringing the songs to a harder, driving ending, or barely noticeable in the background of the quieter songs, the three have their own polished chemistry.

The audience, clearly knowledgeable and thirsty for Hot Tuna, at times were up on their feet applauding, and at other times were perfectly still and quiet as Jorma's voice filled the theater. I had been looking forward to this show all summer and it exceeded my expectations. I really do feel lucky to have seen electric Hot Tuna again, and on this, their 50th anniversary tour to boot. Here is the set list [courtesy of setlist.fm]: 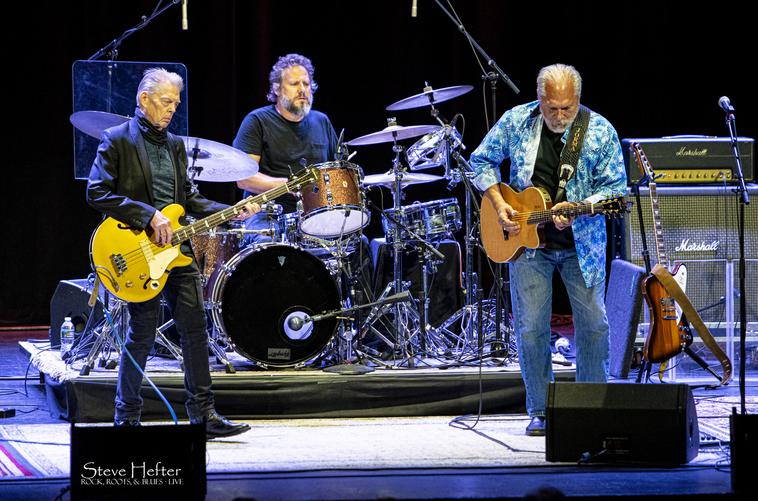