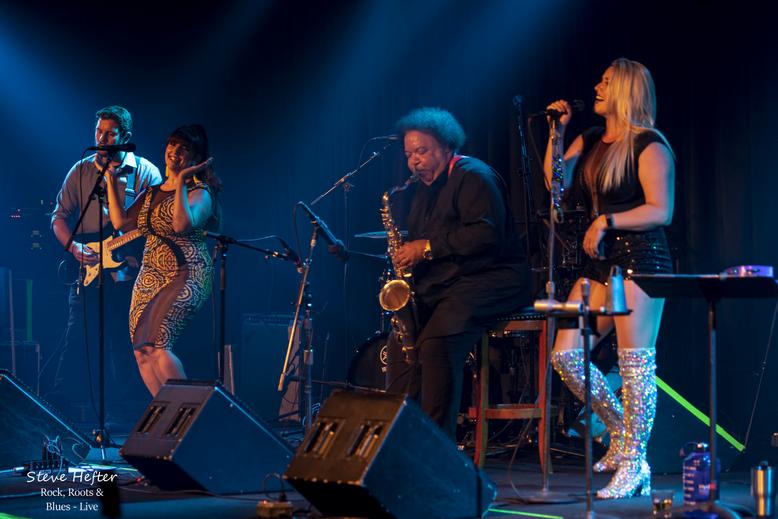 August 7, 2020 at the Birchmere will forever mark the first live show I attended since the beginning of the Covid pandemic. I couldn't have asked for a "better" first show. Ron Holloway is a legendary sax player who has played with all the greats, and been a member of some legendary bands, possibly most notably, as a member of the great Dizzy Gillespie Quintet. He's also been a formal member of the The Warren Haynes Band, The Susan Tedeschi Band, Gil Scot-Heron, and Root Boy Slim.  He has also sat in with almost every major group that we are fans of, including The Allman Brothers Band, Warren Haynes, Tedeschi-Trucks Band, Gov't Mule, Widespread panic, Little Feet, and many, many more. The list of bands he has sat in with goes on and on.

The Ron Holloway Band is a six piece funk/R&B group with Ron Holloway leading the charge on the tenor Sax, Rodney Dunton (drums), Black Betty (Jenny Langer on vocals), Rachel Ann Morgan (vocals), Cory Belcher (bass), and Justin Gillen (guitar). I'm unsure who was more excited to have the RHB playing - the band themselves or the audience.  Since this was likely the first show since the Covid outbreak for all, it quickly turned into a joyous celebration of live music. Ron has surrounded himself with great musicians.  The guitar players are truly awesome and the ladies on vocals compliment each other extremely well, each with their own strong suits, and each with powerful voices that can be soft and warm when called for, and rocking and guttural as well.  The arrangements of the songs showcase the entire band, not just Ron, though when he is playing, there is no mistaking who is leading the charge.  Ron also relishes the music for the music's sake and enjoys sitting back and listening to his phenomenal band belt out the funk. I can only imagine what a pleasure it is working for Mr. Holloway.  He clearly has a deep appreciation for the type of music he is playing and it comes across to the audience. The audience showed it's deep appreciation for the music as the band powered through a 90+ minute set. Needless to say everyone, including the band, was deeply satidfied after the show. It was a real treat that I wasn't sure when I'd get to enjoy again.  Thank you Ron!

~ Check out the photos of the Ron Holloway Band ~​