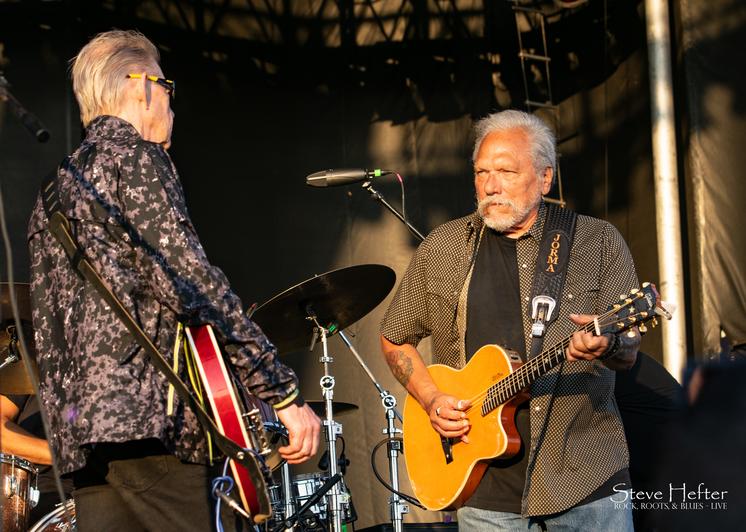 ​
On July 15, 2018 we attended the final day of the four day Great South Bay Music Festival.  The headliner that night was The Dickey Betts Band, re-formed with his son Duane Betts and Damon Fowler, both on guitar, Frank Lombardi (drums), Mike Keach (keys), Pedro Arevalo (bass), and Steve Camilerri (drums). Dickey was there. He was late due due to technical on-stage glitches, but he was there. Sounding pretty good, yet slightly tired. The band played a mostly familiar set of classic Dickey Betts Allman Brothers Band music. Focusing on the top tunes in Dickey's large body of work, the band sounded good and the audience was appreciative to see one of only two surviving members of the original Allman Brothers Band live again. Lead-in sets by The Devon Allman Project, Little Feat, and Electric Hot Tuna were all great, with Duane Betts cranking it out with the exuberant Devon Allman.

The highlight of the evening was Hot Tuna. Jack Cassady (bass, vocals), Jorma Kaukonen (guitar, vocals), and Justin Guip on drums, the trio rolled into some deep Tunain their hour long set. Jorma's voice sounds fantastic as did his unique guitar playing. Jack Cassady is right at home on stage and was loving every minute. It's amazing to think just how long these two have been playing music together; since the pre-Jefferson Airplane days in San Francisco. Prior to the main-stage gigs we also caught a young funky band called Carrie and the Cats. They cranked out a great set of funk/soul/rock jams and the crowd loved them.