On February 25, 2017, The Tedeschi Trucks Band set up camp at The Warner Theatre in Washington, DC. This is not the first time the band has played three nights in a row at The Warner, just as they did on this tour in several other cities. There is something special about seeing a band during a run at a venue, even if only a three day stay. There is an energy that is different than a one night show, the comfort of knowing (both the audience and the band) that they are set in one place for a bit translates an energy to the shows. It's clear to me that Derek Trucks is calmer and more relaxed, having watched him mature live on stage for several years. I was there for the third night, the one traditionally set aside for a straight-up two set show by the band. No guests, just a heavy dose of one of the hottest (if not THE hottest) band on the road today. Tedeschi Trucks is in a groove of creating new music and playing some of the most incredible live performances of their careers. And Susan - wow! Susan Tedesci Trucks is just a blues demon on stage. Her voice has grown into a one-of-a-kind instrument of its own.  Her fierce guitar playing and her deeply emotional giving on stage mix with Derek's complete mastery of his 2011 Gibson SG Dickey Betts LE (his primary guitar) and his clear vsision of where he wants to lead the band, and you have a magical night of rock, roots, & blues!
My first three tunes in the first set were, "Freedom Highway", "Laugh About it", and "Don't Know What It Means"
I got to shoot "Statesboro Blues", "Don't Drift Away", and "Wah-Wah" in set two. 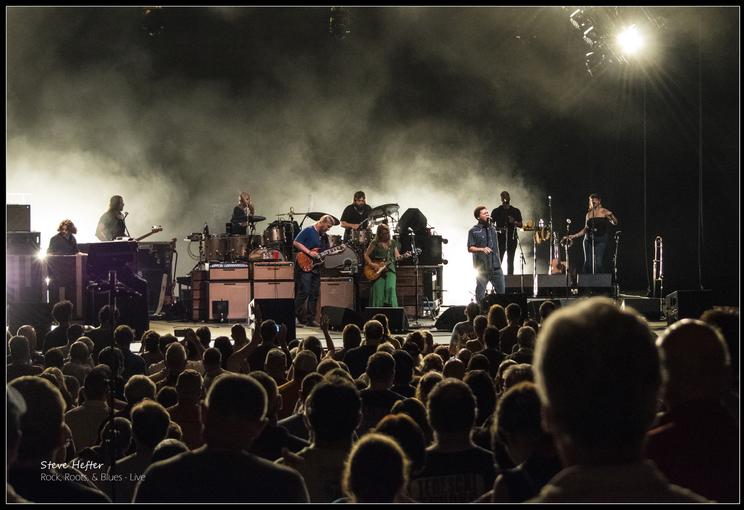